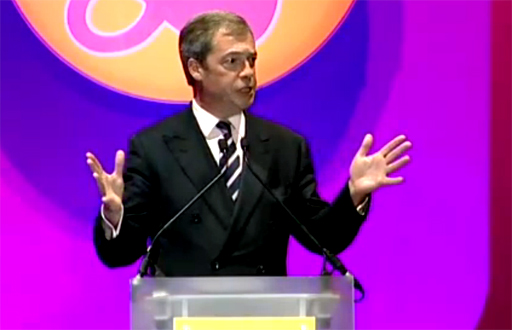 "The Conservatives are part of the problem, not the solution", says Farage at the UKIP party conference in Eastbourne. "They are an exercise in mass deception".

We could hardly disagree with that premise, and it is especially evident as Cameron's europlastics make a bid for leadership of the anti-EU fight, recruiting the Tory front organisation, Open Europe, and the European Research Group as they seek to usurp the agenda and claim it for their own.

However, Farage might be less inclined to agree that the UK Independence Party is also part of the problem – not only (or even) because of his dire tutelage, but because of its very nature as a political party. The very idea of setting up as political party to became the standard bearer for euroscepticism is wrong.

It has taken some time for me to come to that conclusion – having gone through the mill myself, and been a member of the party for many years. And there was possibly a way in which the party could have become an effective champion, had it chosen to confine its electoral activities to the euro-elections. But this was not the path chosen by Farage, who thus compounds the original error.

The essence of the problem here is that "euroscepticism" is not a party issue. It transcends the normal party political divides, and thus attracts no core group on which a ruling majority could be built. As a political party, under whatever name, it is doomed to failure.

The certainty of failure is strengthened when as a party, UKIP seeks to take votes from other parties – and particularly the Tories. This makes it a competitor, challenging the tribal loyalties of the herd, which means it can never do anything but work at the margins. Thus, a eurosceptic party automatically marginalises itself, as it cannot replace the herd ideology with which it is competing.

There is a further error in all this, as "euroscepticism" is a negative creed. It stands for nothing other than to withdraw from a construct which itself was built on a powerful and enduring vision. The positive vision, therefore, is being countered by a diet of negativity, something that also can never succeed.

Oddly enough, the very thing which best demonstrates the failure of UKIP – and the reason why it will never succeed – is the European Union itself. In its emergent stages, from the end of the First World War, the movement supporting the idea of a united Europe never sought to become a political party. Its guiding light was and remains a movement, the European Movement.

Looking back further, most of the great changes in our history – and in history generally – have come from outside the political party framework. The Chartists immediately spring to mind and, of the great "isms", the most powerful of them all is Socialism, which dominates all three of our main political parties.

Yet there was never a political party in the UK which took "Socialists" as its official name – or even aspired to socialism as its main objective. The Labour party might have used socialism, but the main interests of its component parts were somewhat divergent.

It is fair to say, therefore, that if euroscepticism is to prevail, it must do two things. Firstly, it must cease to be associated with any political party – neither UKIP nor the Tories are safe custodians of the flame of freedom. Each will use it for their own base purposes.

Secondly, the movement – and that is what it must become – needs to develop a positive vision for the future, one not linked to or dependent on any specific party ideology, but complementing them all, in the same way perhaps that "democracy" can be embraced by all political parties. Effectively, we need a cross-party model for Britain in a post-EU world - or one that can draw enough support from all parties to become a majority.

That much we need, and that much we will hardly get from UKIP – and especially with Farage at the helm. But if by some miracle, it came up with a vision for the future, it would be rejected by the other parties, simply because UKIP is a competing political party.

One would like to think, therefore, that this year's UKIP conference could be the last. But it won't. The UKIP tribe has developed its own ambitions and will pursue them independently of its supposedly core mission. Thus, with the Tories on one side and UKIP on the other – and enemies all around us – we are surrounded.

On the plus side, we have the European Union. Against an enemy like that, we should not be able to lose. With UKIP on our side, though, I'm not so sure.