Holed below the waterline 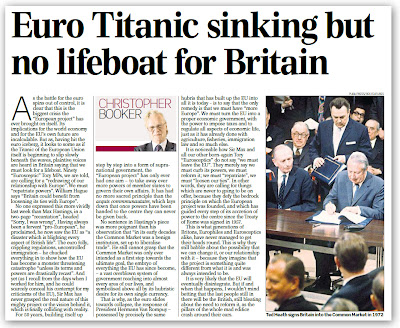 Although the hundredth anniversary of the sinking of the Titanic is not until next year, Booker uses the obvious imagery in his column, under the headline: "The Euro Titanic is sinking but there's no lifeboat for Britain".

We are of a mind, as you would expect. Neither of us is taken in by the spin, with Booker asserting that the euro spinning out of control is the biggest crisis the "project" has ever brought on itself. Further, its implications for the world economy and for the EU's own future are incalculable.

However, as the Titanic of the European Union looks to be slipping slowly beneath the waves, the thrust of the piece is to have a swipe at those "plaintive voices" that are saying we must look for a lifeboat. Included in those are the 120 so-called "eurosceptic" Tory MPs, calling for a "redrawing of our relationship with Europe".

But particular venom is reserved for the poseur Max Hastings, who delivered his two-page "recantation", headed "Sorry, I was wrong", in The Daily Mail last week. The thing about Hastings, as Booker recalls from the days when he worked for him (as did I briefly when Booker and I ran a joint column in The Daily Telegraph), is that he could scarcely conceal his contempt for his criticisms of the EU.

Yet this is a man who, for all his supposed erudition and claims to be a historian, has never grasped the real nature of the "project" or the vision behind it. He is at one with so many Tories who believes that it was originally set up as a free trade area and has somehow gone off the rails.

I find it intensely irritating when these "above the line" figures waft through life, with their lofty, condescending demeanour, asserting that which is palpably untrue, simply by dint of their refusal to get to grips with the reality, or to do their homework and ground their beliefs in fact.

In fact, I can't even begin to express how sick I am of these patronising, sneering grandees who have spent decades looking down on us all, so superior in their profound ignorance, and so absolutely certain that only they can possibly understand the true nature of their beloved "Europe".

But it is the likes of Hastings who – even to this day – simply cannot accept that, for fifty years, building itself up step by step into a form of supranational government, the "project" has only ever had one aim – to take away ever more powers of member states to govern their own affairs.

People like him think that the over-regulation which so typifies the EU is an aberration, totally unable to comprehend that the community has had no more sacred principle than the acquis communautaire, a means by which economic regulation is used to achieve political integration.

Thus, no sentence in Hastings's piece was more poignant, writes Booker, than his observation that "in its early decades the Common Market was a benign institution, set up to liberalise trade". This is so far off the wall that one really struggles to accept that anyone could be so monumentally thick as to believe that.

He just cannot grasp that the Common Market was only ever intended as a first step towards the ultimate goal, the embryo of everything the EU has since become – a vast overblown system of government reaching into almost every area of our lives, and symbolised above all by its hubristic desire for its own single currency.

Locked into this sagging myth, it is noticeable how Hastings and all the other born-again Tory "eurosceptics" do not say "we must leave the EU". Believing that their own flawed vision can be restored, they thus call for EU powers to be curbed, that we must "reform" the EU, that we must "repatriate" powers or "loosen our ties".

In other words, all these muppets are calling for things which are never to going to be on offer, because they defy the bedrock principle on which the European project was founded, and which has guided every step of its accretion of power to the centre since the Treaty of Rome was signed in 1957.

This is a frustration that so many of us share, Boiling Frog and Witterings from Witney being the most recent to express what Booker articulates for us.

Generations of Britons, europhiles and eurosceptics alike, he writes, have never managed to get their heads round this simple fact that the EU was always designed as a machine to achieve European political integration. It has no other purpose.

This is why the muppets still babble about the possibility that we can change it, or our relationship with it – because they imagine that the project is something quite different from what it is and was always intended to be.

Thus, concludes Booker, it is very likely that the EU will eventually disintegrate. But if and when that happens, he wouldn't mind betting that the last people still in there will be the British, still bleating about the need to reform it, as the pillars of the whole mad edifice crash around their ears.