A statement of the bleedin' obvious 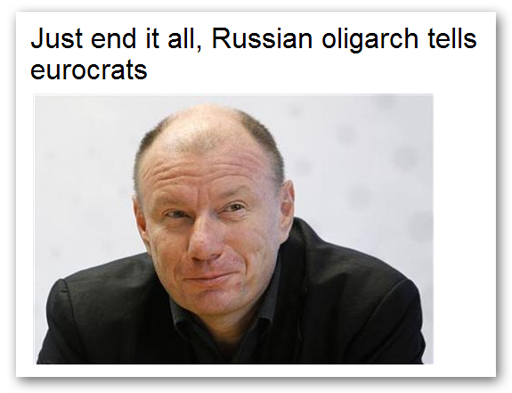 You do so wonder about these ever-so-grand people like Andrew Lilico, who come up with their sooooooo important statements. They make out as if they had suddenly come up with a profound truth that only they have discovered, when half the world has been taking it for granted, almost forever.

Thus says Lilico, the collapse of the euro equals collapse of the EU. And yes, we knew that. And that is why the "colleagues" are fighting tooth and nail to shore up the single currency.

But it is as much to do with the political realities. Collapse of the euro would mean the first serious reversal of the process of European political integration, in a project which relies on forward momentum to achieve its aims. A reversal would puncture the bubble and involve such a massive blow to its authority and credibility that it would never recover.

Warner seems to be struggling with that so it is rather interesting to see the Russians (well, one Russian) tell the euroweenies to get on with it. Like so many others, he agrees that Greek default is inevitable ... technically, it may already have happened.

Merkel, it seems, is not listening, but the view is that she is struggling for her own survival. If the euro and the EU cracks, she goes with it. But for some time now, the euro has been dead man walking … it has now slowed to a crawl and it will not be long now before its fate is sealed. So too, it seems, will be Merkel's fate.