The Siege of Bradford – day two 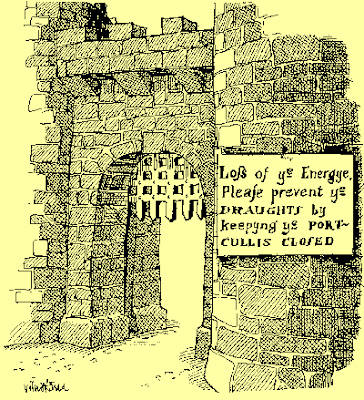 On the second full day of the Great Siege of Bradford, EURef Towers is strangely quiet. The boiling oil is simmering gently on the stove, but of the bailiffs there has been so sign. Mrs EU Referendum has sallied forth from the back door and crept past the piquet lines in order to forage for essential supplies. She may be gone some time. The guard has been posted over the portcullis and we await further developments.

Meanwhile a counter-offensive has been under way, in the form of Freedom of Information requests addressed to the enemy citadel, demanding information on the number of Council Tax summonses and liability orders sent out each year.

As a rough estimate, we believe that about 80,000 such documents are issued each year, for which in the order of £3 million is being charged. This is for what amounts to single sheets of paper, sent second class to addresses on the Council database.

The law as it stands allows council to recover "reasonable costs" for these documents and it is those costs which we are seeking to establish. But, on the face of it, the Council would appear to be overcharging for these documents to the tune of at least £2.5 million a year (being extremely generous to them).

This is money extracted from those already in debt and least able to afford the fees. Further, it could be that the unlawful demands contravene the Fraud Act 2006, in which case criminal charges could be in order. Bradford MDC is living off the proceeds of crime.

In between stoking up the fire to keep the oil hot, therefore, we will be seeking to establish the degree of overcharging and, as a first step, insisting on a refund to all those who have been over-charged. Over the 20 years since the current regulations came into force, that could set Bradford back by about £50 million.

However, Bradford is by no means alone in its peculation, an article in The Independent a few years ago (2008) indicating that nationally, Councils took about £230 million annually through such fees.

Over the 20 years or so of the current regulations, we are probably looking at an overcharge of £200 million a year (adjusted for inflation). By next year, therefore, we could be looking for refunds in the order of £4 billion. That is the extent of the rip-off.

If there is anyone who would like to join in the endeavour to make this happen, the first stage is to contact your local council with an FOI request, asking for details of the number of Council Tax summonses and liability orders they issued each year since April 1992 – or as far back as their records go – and the sums charged for each document in each year.

Send me the details and I will collate and publish them on the blog. From that, we will build the picture and start shaking the money tree.