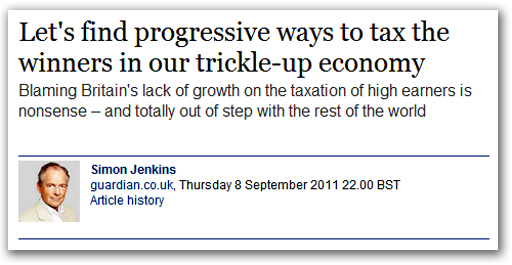 One of the few intelligent commentators left in the mindwash these days is Simon Jenkins. I have his book now, on the history of England, and fine reading it is. I will review it when I have finished. This day in The Guardian, though, he takes on the vexed issue of taxation, to the evident approval of Tim Worstall, which is something very special.

What catches Worstall's eye is the Jenkins view on property taxes which, he avers,


… cannot be evaded, and properly imposed are a fair generator of government revenue. Better, they are traditionally paid in anger. Any tax paid in anger is a good tax – the opposite of a stealth tax, because the payer demands to know how it is spent. Property taxes are thus a spur to democratic interest and activity. That, of course, is why politicians detest them.

One can immediately see the power of this argument, although there is a long way to go before it can be said that our current system is "properly imposed". Personally, I am not sure it can be. There are so many inherent anomalies that by the time you have finished with devising rebates and adjustments, it becomes so complex that it is both expensive and unworkable.

However, what is missing from the argument – and essential to it – is discussion of tax levels. The perception of fairness, or otherwise, of a tax stems as much from how much is extracted, as the nature of the tax. People who might tolerate an "unfair" tax will become less tolerant when it becomes a significant imposition.

There are also the issues of how the money is spent, and the degree of control we, the people, are able to exert over the expenditure. Fairly self-evidently, if there is general approval of the government activity, and it is felt that popular demands are respected, then hostility to higher tax levels may be muted.

What is intolerable, though – and very much the situation in which we see ourselves today – is where taxation levels are high yet we neither approve of the way the money is spent, nor feel we have any control over how much is extracted, and how it is spent.

To that extent, the Jenkins argument speak for itself, as we see more and more people drawn into the political debate over the single issue of Council Tax. It invokes a degree of passion which few other local issues can match.

But, while we see the discussion on the nature and level of taxes, there is considerably less exploration of how we bring government spending under popular control. This, of course, was the thinking behind Referism, and I remain of the view that the annual budget must have a democratic mandate. Electing the fools to our parliament is not enough. We must have more control over what they do.

Arguably, though, national politics is too big and too distant for people to deal with, in which case the issues must be brought down to local level. And in that context, we hear arguments for local income tax, and even local sales taxes.

To restore (or improve) democracy, however, one might argue that all (or most) taxes should be local – levied locally and collected locally. Central government should then be paid from precepts negotiated with each of the local authorities.

A proviso of this might be, in extreme circumstances, where the local electorate refuses the local budget, the local authority might be forced to deny central government its funds. The root of all evil is the money tree, and that lies at the heart of the politicians' power. We must control it.

Such ideas, inevitably, would be an anathema to the politicians, but what has struck me about the independent blogosphere of late, and this blog's forum, is the number of ideas coming forward, and the quality of the debate. This we are not getting and will not get from the centre and, if we are to see any change, it is going to come from the bottom. Politicians follow – they do not lead.

As even today we await the bailiffs – if indeed they show – the bottom line is that we have a government without an electoral mandate, largely dictating what local government will do, with peremptory demands placed on us to pay the bills. This, to use the contemporary jargon, is "unsustainable". Whether it is by facing down the bailiffs on the street, or confronting the politicians in their lairs, we have to take back control.