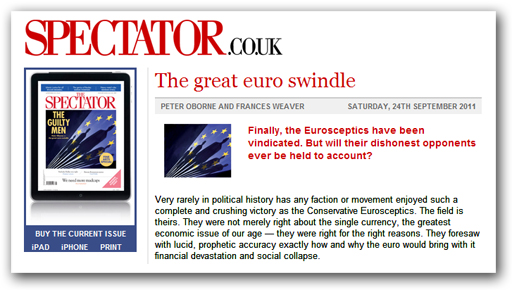 There are very few occasions when I disagree with Dellers, but his eulogy of Peter Oborne and Frances Weaver and their "Guilty Men" pamphlet is one such occasion. We then have this ghastly pair in The Spectator grandly declaring:


Very rarely in political history has any faction or movement enjoyed such a complete and crushing victory as the Conservative Eurosceptics. The field is theirs. They were not merely right about the single currency, the greatest economic issue of our age — they were right for the right reasons. They foresaw with lucid, prophetic accuracy exactly how and why the euro would bring with it financial devastation and social collapse.

This is typical "above the line" crap, but it is more than that … it is practically a blood libel. The victory, such as it is, goes to Jimmy Goldsmith and his Referendum Party, and the thousands of candidates and workers who boxed first Hague and then Blair into a corner, getting a commitment to a referendum before the UK could join the euro.

As always, while the Tories sat around their hands in their pockets, the mavericks made the running. The Tories simply went along for the ride. And if you want "guilty men" look to the likes of The Scotsman on 5 October 2004. Then, James Kirkup and Fraser Nelson were writing about Michael Howard and his "best efforts to bury the Tories' divisive obsession with all things European".

John Redwood, they said, appeared determined to make opposition to the European Union the party's first priority. "Above all, we’re going to win by telling people the truth about Brussels and the EU - no to the European constitution, no to giving up the pound", he was saying.

Cut then to David Cameron, who was at the time about to oversee the writing of the Tory manifesto. He delivered a direct rebuke to the former Welsh secretary. "We don't win by picking one single issue, whether it's Europe or anything else, and talking about it incessantly", said The Boy, described then as "a rising star, tipped by some as a future Tory leader".

Said Cameron back then in 2004, "If you don't sound balanced, you won't seem balanced." Thus did he say that the Tories had to focus on "schools, hospitals, crime - the things people talk about in the pubs and clubs. We mustn't go off into wild forays into different areas".

From there we saw the Tory dictum, "don't mention Europe". All the good little Tories, Redwood included, rolled over and obeyed. The EU disappeared from the agenda. They are the guilty men, the men who said nothing while others fought the battle. At least the europhiles had the courage of their convictions. The Tory eurosceptics had neither courage nor convictions.

Now it has become fashionable to be "eurosceptic" and they are all creeping out of the woodwork, with the court jester Oborne singing their praises. So no, this is not a Tory eurosceptic victory – but like Tories everywhere, they'd steal the clothes off your back if it gave them a headline. They are stealing a "victory" won by others.