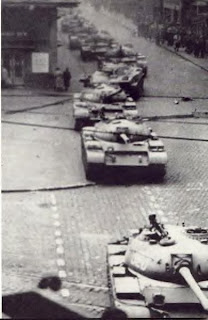 Sad to say but some of our readers have not taken kindly to my alternative toy series. My suspicion is that they have an alternative IQ.

Normally I would say that this is my blog and I post what I like on it. When I last looked there was no legislation that forced anyone to read it. There are many blogs out there. Let the market rule.

However, just for once I have decided to pander to their alternative ideas and put up a serious alternative toy.

This is a row of T-54s rolling down the streets of Budapest in November 1956, watched by a sullen (one assumes) crowd and photographed by someone who just happened to be there. As a child I saw brothers of these toys rolling down other streets, watched by very silent people. The third tank is somewhat different and it has been suggested to me that it is probably a PT-76, an amphibious tank, which would explain the boat-like shape.

Having pandered to those of alternative IQ, I shall return (just as soon as I can be bothered) to the original concept of the alternative toys.