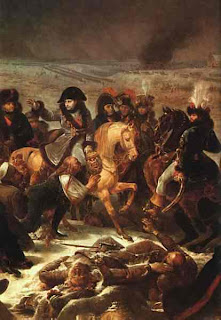 We all need reminding in the midst of the present political controversy that UKIP has its uses and would be sorely missed if it disappeared (and not just for its entertainment value).

England Expects tells us that it was UKIP that fed the story to the media about the proposed common European history textbook, though it was Graham Brady, the Conservative Europe spokesman who managed to get most of the huffing and puffing in.

Actually, this is not a particularly new idea and, our readers might recall that this blog covered a similar story that emerged from Belgium a couple of years ago. There have been many attempts to create a European history textbook that would avoid all the – how can describe it – difficult passages, which just happen to be the most interesting ones as well.

While both the Sun and the Daily Telegraph blamed Germany for this idea, one imagines the French are not exactly averse to imposing a single European view of the past. But which past would that be?

There is, as the article in the Telegraph points out, a model for this hilarious idea, a Franco-German project, which would not surprise anyone.

The Franco-German Histoire Geschichte was launched last May, with a first edition covering history since the end of the Second World War. The text is taught as part of the higher curriculum in both French and German schools and has the expressed aim of overcoming old enmities.

Speaking at the launch event, Gilles de Robien, the French education minister, said: "The great lesson of this story is that nothing is set in stone – antagonisms that we believe are inscribed in marble are not eternal."

Much of the first book of Franco-German history is devoted to the creation of the EU. "Through its willingness to co-operate with the Third World, its attachment to multilateralism, its dialogue with other regions, the EU appears as a model on the international scene," says the text.

Ten historians, five from each country, contributed to the book, which is published in both German and French and retails for €25 (£17).

Of course, M de Robien is right in his statement that nothing is set in stone, not even the European Union. On the other hand, given the CAP, the CFP, protectionist trade deals and many millions of euros spent on subsidizing bloodthirsty kleptocrats in position of power, I would question the EU’s record as a good world team player.

Mind you, one cannot help laughing over the following:

But political differences between Germany and France have surfaced over the role of the United States in Europe. "For France, traditionally the US is considered a great power which is a sort of rival," said Peter Geiss, one of the book's publishers. "That's not possible in Germany. For Germany, the US after 1945 has never been a rival. The reconstruction of Germany is associated with American presence."

How to deal with Communism has been another problem. While the Communist movement was of political importance in France in the 1950s and 1960s, it was associated in Germany with dictatorship, the East German regime and Soviet expansion.

While 80 per cent of the book's content is identical in the two languages, assessments of the US and the history of the Communist German Democratic Republic differ.

Other areas where French and German historians could not agree was on French colonial history and the Christian church.

What on earth is left in the textbook to fill up that 80 per cent? Not, I presume, the two world wars, or not in any detail, the occupation of France or French collaboration, the Franco-Prussian War, the invasion of German states by revolutionary and Napoleonic France or the Thirty Years’ War at the end of which France managed to grab a decentish chunk of territory, such as Alsace and Metz.

Personally I cannot wait for the book to be published in Britain.