The way our government works 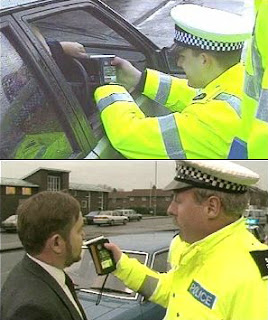 Repeated online, it tells us that motorists face random breath testing under government plans to reduce the toll of deaths and serious injuries from drink driving. Ministers, we are told, believe that giving the police the power to stop any driver, regardless of how they are driving, would be a powerful deterrent.

But hang on a moment. In May 2004, when this last came up, we had a robust statement from the Home Office, which insisted that random tests are not an efficient way of catching drink-drivers. Then, it saw no need for them to be introduced. What has changed?

What we do know is that the casualty rate from drink-driving has gone up in recent years, although many commentators put that down to the reduction in routine traffic patrols, as enforcement authorities give vent to their obsession with speed and replace uniformed police with entrapment robots, aka speed cameras. Random testing, therefore, is not the issue – the number of tests, and the need for routine patrolling is.

But, those with longer memories may remember that there is another agenda at work here. Back in May 2004, it was the EU which was demanding random testing. And, while the Home Office was resisting the idea, we wrote:

...and here is the crunch - the president of Tispol, the European Traffic Police Network, said the (EU) commission would attempt to make its recommendation a directive if it is not followed.

Says Ad Hellemons, also Dutch Assistant Commissioner of Police, talking to BBC Radio Five Live: "This is the first time the European Commission has made such a recommendation. The vast majority of member states already carry out random breath tests. We can’t understand why governments would want to protect drink-drivers".

"The European Commission has made it clear that they expect this recommendation to be followed. If not they will try to make it a directive". There you have it – you will do as we "recommend", or we will make it compulsory.