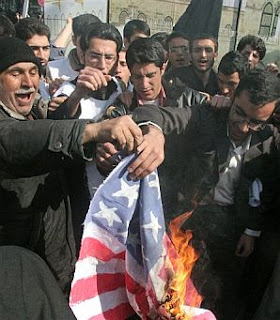 The picture shows a scene outside the British embassy in Teheran, with protestors burning a US flag in an anti-British and anti-Israeli demonstration – which tells you something of their politics.

The "sponteneous" demonstration marks the finding by the International Atomic Energy Agency – to absolutely no-one's surprise – that Iran has expanded its uranium enrichment program instead of complying with a UN Security Council 60-day ultimatum to freeze it, issued on 23 December.

The finding paves the way for the case to be referred to the UN Security Council, which may then consider further sanctions against the Iranian government.

And so, once again, "soft power" triumphs.