A sky black with chickens... 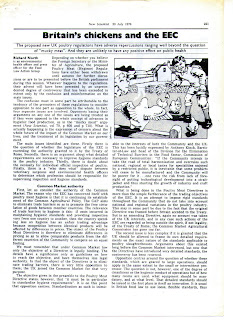 It was in 1976 when I and a handful of colleagues – all of us environmental health officers – woke up to the enormity of what the government had done in signing us up to the EEC.

We had only been in a couple of years and a programme was under way of integrating into UK law all the EEC directives that had been passed before we joined the community. One of those was the now infamous (to us) poultry meat marketing directive (Directive 71/118/EC) which the Ministry of Agriculture, Fisheries and Food was proposing to transpose as the Poultry Meat (Hygiene & Inspection) Regulations 1976.

From a strictly selfish point of view, we saw in the regulations a threat to our own profession. This stemmed from our own very history as a nation in that, in Europe, the institution of the environmental health officer (EHO) was unique to the UK. For historical reasons, our public health system had evolved within a framework of local authorities and Medical Officers of Health, with the EHOs doing the field work, including the all-important inspection of meat and poultry production and the control of imported food. 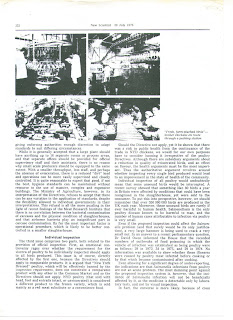 On continental Europe, by contrast, the system was invariably managed by central government , with the field work carried out by veterinary officers – usually qualified veterinary surgeons. And, because EHOs did not exist on the continent, we were being obliged to scrap our system and adopt the continental system.

As our campaign against the regulations developed and matured however, we needed to attract allies, so the scope of our attack widened, with the state of play being summed up in an article I wrote for News Scientist in July 1976, published, by coincidence, on my 28th birthday. (Click on each page facsimile to read the full paper).

For all of us closely involved in the campaign, which we called F.L.A.G (Food Law Action Group), the learning curve did not stop there. In what was our first substantive contact with EEC we found that this was more than just a technical directive. It sought to change fundamentally the whole nature of the food control system in the UK. 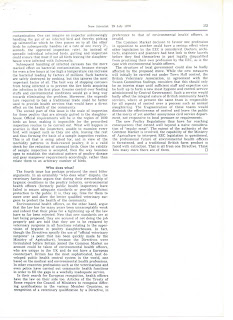 As far as imported food controls went, the philosophy was one of inspection according to a harmonised regime by national authorities at the point of production, with no further inspections when produce crossed any borders, as opposed to our system which relied largely on inspection at the point of entry.

The two different systems each have their own merits but the point of issue was that the "point of production" system was more attuned to continental trade, where border controls were difficult to enforce – as opposed to our system which worked because we live on an island. In other words, we were being forced to dismantle a system developed for an island economy, in favour of one developed for a continental land mass, all in the name of political integration.

Despite a spirited campaign, when we actually forced a "prayer" against the regulations and a debate in the House of Commons, we lost the vote when the Tory front bench, with the support of the NFU, changed sides and supported the then government, casting its vote in favour of the regulations. Without that betrayal, we might have won the vote.

With that, we have seen a slow but inexorable revolution in the way our public health system is managed, and in the way our border controls are applied, with the outcome which is now only too evident - as lamented at length in the The Daily Telegraph today.

Thus it is that we are told that even if the government was convinced of a link between Hungarian imports and the Suffolk bird flu outbreak, ministers say their hands are tied by European laws that prevent countries imposing unilateral food bans. In this particular instance, it is the EU Directive on Avian Flu lays which sets down the limits of our government's powers, but this Directive stems from the same wellspring as did 71/118/EEC – the Treaty of Rome. 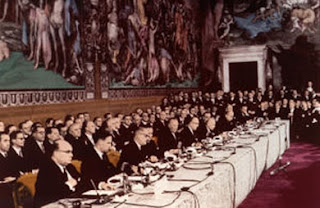 So it is that next month, the Europhiles will be celebrating the 50th anniversary of that Treaty. And, when they do, then perhaps will be an appropriate time to remind people that it was that instrument, which the government signed up to in 1972, which robbed successive governments of the power to protect their citizens (and industries) from the risks of imported infectious diseases.

The worst of it is, though, that so few people understood how the old system worked, and even few have any idea how the EU system operates – and why it is fundamentally flawed – that the moment will be lost. Advocates of the EU will tell us that one of the benefits of our membership is "improved safety", when the reality is that it has created an open door and a welcome mat for potential killers.

But it was the same back in 1976, when it first dawned on us what our government had done. Ever since, I have been writing, speaking and doing all manner of campaigning, to get the central message across that we have given up important powers, to the detriment of our own society.

On seeing the "born again shock" of the likes of the Telegraph, as a new generation of journalists learns of the reality of the EU, one has this weary sense of déjà vu. We have seen it all before – nothing has changed in the 30 years of our membership. That was what our government signed up to. That's what our MPs agreed to and they continue to agree to this situation to this very day.

However, in a few days time – unless the unlikely does happen and there is a epidemic of human host-adapted H5N1 – all this will be forgotten … until the next time. Would that we could have a "Soylent Green" moment, when the whole population woke up to the enormity of what our governments have done. But it ain't going to happen - yet. It is going to take bodies in the streets, and it is unlikely that bird flu will put them there.

Needless to say, if you look up today, you will see the sky black with chickens … coming home to roost.