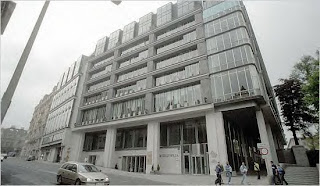 Say what you will about the new intake but they are quick learners. Gone are those wonderful economic ideas they were going to bring into the EU to revive its somewhat sclerotic economies.

I am talking about Poland, which has, of course, had an election since then with the Law and Justice Party, headed by President Lech Kaczynski and his brother, Prime Minister Jaroslaw Kaczynski, coming to power and recently distributing as many ministerial positions as possible to their various buddies.

One of them, the Treasury Minister Wojciech Jasinski announced recently that the Warsaw stock exchange is to be privatized. Well, after a fashion. The government will retain 51 per cent of the shares and will subsidize its expansion into other countries in the region if it felt like taking over parts of any other stock exchange.

As the International Herald Tribune reported

In his speech Jasinski also outlined a plan by which the Polish government would back the Warsaw bourse's expansion outside Poland. The exchange has already expressed interest in buying stakes in markets in Bulgaria and Slovenia. Jasinski said that the Warsaw exchange could issue nonvoting shares to "acquire enough capital to purchase other European exchanges" and that any company that participated in the initial privatization would be compelled to purchase these nonvoting shares later.

This is rather an odd view of privatization and is not regarded with any favour by such institutions as the Wiener Börse.

That policy would run directly counter to efforts by Wiener Börse to nurture a network of Central and East European exchanges through cooperation agreements on things like financial data distribution and product development.

The Vienna exchange has also taken a direct stake in the Budapest exchange, and its co-chief executive, Michael Buhl, has said that it is interested in a similar arrangement with Warsaw "if we are welcomed as a strategic investor."

"We are in any case interested in a stake in the Warsaw exchange," Buhl said. "But we would under no circumstances take part in an unwanted takeover."

Jasinski dismissed the pretensions of the Austrian stock exchange as being of no significance. Austria’s population is only 8 million, while Poland’s is 38 million, he pronounced and any sale of the stock exchange should go the other way. This is an interesting view of economic development, not shared by all that many people. Presumably, using that argument, should Nasdaq be foolish enough to display an interest in the Warsaw stock exchange, its shares ought to be made available to the organization that is based in a country far larger than Poland.

Actually, according to Jasinski, foreigners will not be able to buy shares in the stock exchange when and if it is privatized.

…a strategy by which the Polish government would sell some of its holdings to "Polish investors" in blocks of 5 percent to 10 percent, while retaining a 51 percent stake itself.

Warsaw, he said, also intended to introduce regulatory changes to prevent companies listed on the exchange from being taken over by foreign companies "to ensure that the stock exchange will retain its Polish character."

"A sale to foreign interests is out of the question," Jasinski said. "I think that such a sale could risk reducing the stock exchange to the subservient position of taking orders from one of the major European exchanges."

Surely not. Not Poland with all those people.

As it happens the Polish government may run into difficulties with the Commission over that, as restricting who shares go to in privatization along national lines is against EU rules, something that, it is assumed, Jasinski does not know.

So far the Commission seems not to have heard of this plan. Jasinski's own office is busy backpedaling:

"The advisors still need to prepare the company for privatization," Jasinski's spokeswoman, Agnieszka Dluska, said. "There is still much analysis to be done."

By which time there might be another government in the country.