A cause for shame? 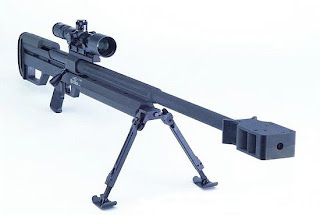 An old story re-emerges in The Telegraph today – but with an added twist.

The original story, broached in December 2005 by the BBC, amongst others (with the Telegraph following in January) was that the Austrian government had authorised the sale of 800 Steyr Mannlicher HS50 rifles to the Iranian government, supposedly for use by the National Iranian Police Organisation, which claimed they were for anti-drug smuggling operations.

It now appears that, less than two months after deliveries began to Iran, an Iraqi insurgent shot dead an American officer in an armoured vehicle, using the weapon.

Now, according to The Telegraph, in the last six months US forces have discovered small numbers of the rifles but, in the last 24 hours, a raid in Baghdad brought the total to more than 100 seized from Iraqi insurgents.

The fact that these rifles were sold directly to the Iranian government strongly reinforces the US assertions that Iran is actively providing aid to the insurgency in Iraq – a claim made last Sunday by "senior US defence officials" who claimed that at least 170 US and allied soldiers had been killed since June 2004, using Iranian made or supplied weapons. 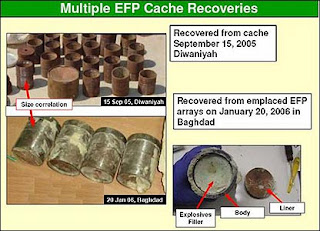 The US officials presented their evidence at a background briefing in Baghdad's fortified Green Zone, backed by an array of photographic material showing anti-tank rounds and mortar bombs of Iranian origin, plus captured IEDs designed to produce explosively formed projectiles (discussed here).

The figure of 170 is relatively modest compared with the 3,113 US troops who have died in Iraq since the March 2003 invasion, and the 132 fatalities suffered by Britain over the same period. Furthermore, the charge was soon rejected by Iranian president Mahmoud Ahmadinejad as "baseless", the release of the evidence by the Americans being attributed to a ploy to rack up the tension between the US and Iran, to justify a pre-emptive strike against Iran's nuclear facilities. 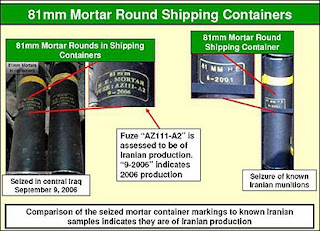 This was very much the line taken by the BBC, with "world affairs correspondent" Paul Reynolds asking, "why now"? He pointed out that these were old charges. In October 2005, the then British ambassador to Iraq William Patey told reporters in London that Iran had been supplying technology used to kill British troops in Basra. Then US officials made similar claims over the last year. General George Casey, the then US commander in Iraq, said so in June 2006.

If you take the claims at face value, Reynolds wrote, the reason is that only now has the evidence become substantial enough to be made public. "The number of attacks is said to have grown as well, so that is another explanation put forward for going public now. A trend has been identified about which information should be given." 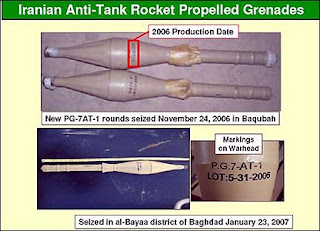 But, the man from the BBC added, it could also be that the US is softening up world opinion for an attack on Iran. Such an attack would be aimed at Iran's nuclear facilities. At the moment, Reynolds observed, the US lacks a casus belli and by claiming that Iran is responsible for killing USA troops, it could be laying the groundwork for a "self-defence" justification.

In the murky world of Middle East politics, any of this could be true, and more. It rarely pays to take things at face value. But one thing is evident. The US was perfectly right to protest at the sale of the rifles to Iran and to impose sanctions on Austria in December year last.

And how typical it was of those wonderful, peace-loving "Europeans" at the time to complain that the US action "could hinder diplomatic efforts by the EU to end the standoff over Iran's nuclear programme."

No doubt they were thinking that it was totally unreasonable to object to Austria being allowed to sell these murderous weapons in circumstances where they could be used to kill US soldiers. EU officials are doubtless thinking that these gung-ho Americans should be thoroughly ashamed. The surprising thing is that the Telegraph has not made that point for them.