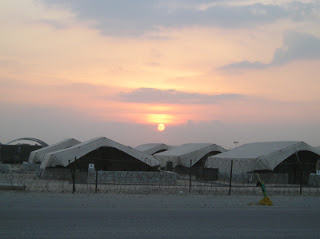 Following our piece on the protection afforded to our troops from mortar attacks, I was sent a series of photographs taken by a serving soldier, of accommodation in the Shaiba logistics base, just outside Basra.

The top picture shows the basic 12-man tents, and the "protection" of a low, block wall around each tent. No more than three feet high, and not even cement bonded, this was the main "defence" against mortar attack. 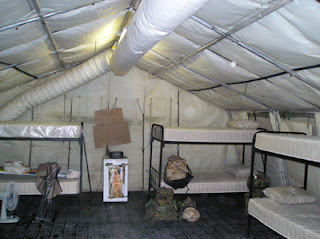 The second photograph shows the scene inside one of the tents. When the mortar attack siren goes (after the first bomb has hit, without warning), soldiers on the top bunks are supposed to climb down and hide under the lower bunk. This is what you call "layered defence".

That is the reality of service in Iraq. The use of the Hesco barriers provides only the illusion of protection as, in their final flight path, mortar bombs descend nearly vertically. All that lies between soldiers and death or disfigurement are thin layers of canvas and the thickness of a mattress. 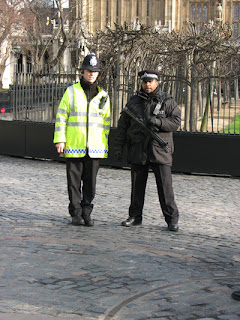 As we observed earlier, imagine how quickly action would be taken if the Houses of Parliament were being mortared each day and the MPs had to sleep in unprotected tents in Palace Yard.

Yet these self-same MPs - and their staffs - who ritually applaud the bravery of our troops, skulk behind their barriers and armed guards while – with a few honourable exceptions – they permit without comment our soldiers to be exposed to quite unnecessary risks. And the secretary of state hides behind honeyed generalities and vague assurances, while the media sleeps.