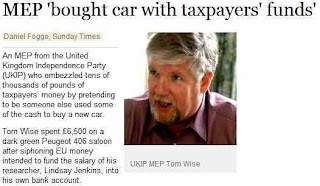 There can be no hiding place left for MEP Tom Wise, and it looks like he knows it, having been spotted back in the UK, leaving early after being suspended from the UKIP EU parliamentary group today.

Daniel Foggo of The Sunday Times has done for him, gaining an admission from the MEP that he used £6,500 of the money embezzled from his EU secretarial fund to buy a used car. The car was a dark green Peugeot 406 saloon and the W-registration diesel vehicle is still owned by Wise.

The admission contradicts previous UKIP statements that the cash had not benefited Wise personally. These first emerged following an earlier internal inquiry under the former party leader Roger Knapman, who insisted that, "On all the evidence that I have seen, I can say that at no time has Tom Wise personally benefited in any way nor has he ever intended to. His intentions have been honest and honourable throughout."

Even three days ago, Foggo was telling us that Farage was holding the line, insisting that MEP had not benefited from the scam personally. Now, he is suggesting that perhaps his earlier judgement was "generous".

In the context, the use of the word "judgement" might be considered generous especially as Wise, in addition to buying his car from taxpayers' funds, also made other payments from his EU account, including several four-figure sums. The words "cover-up" are being muttered in some quarters. Too many people were prepared to present the man as a fool when, in fact, they knew him to be a thief.