A toy to end all toys 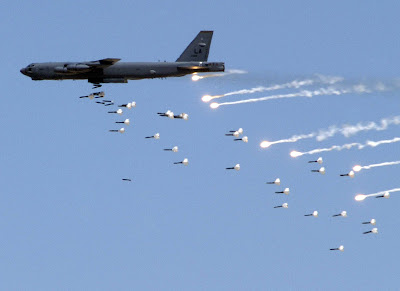 For our real Thursday toy, we publish a photograph of a US Air Force B-52 Stratofortress bomber from Barksdale Air Force Base, Louisiana, dropping live ordinance (sic) over Point Bravo, Nevada (NV), during a firepower demonstration. 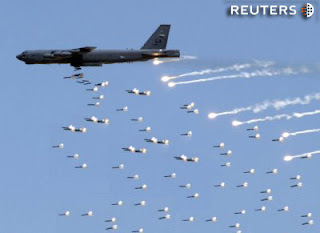 The photograph is taken by SRA Brian Ferguson, USAF on 12 May 2004. Unusually, we have also been able to obtain the Reuters version of the same photograph, credited to Adnan Hajj, which is published here on the right.

The bombs, incidentally, are retarded, the little thingies at their ends designed to slow them down in order to permit dropping from lower heights. I suppose, though, in this PC world, we are not allowed to use the word "retarded". Suffice to say, therefore, that they are bombs with "learning difficulties".