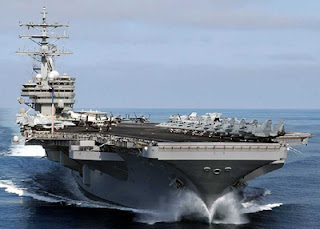 American military operations for a major conventional war with Iran could be implemented any day, says The New Statesman. If that is the case, and an attack is made, it will completely fit with the prediction made in November and highlighted by this blog, that there was a window of no more than six months left in which a strike could be made.

This has been planned for over four years and the US army, navy, air force and marines have all prepared battle plans and spent four years building bases and training for "Operation Iranian Freedom". The US navy can put six carriers into battle at a month's notice. Two carriers in the region, the USS John C Stennis and the USS Dwight D Eisenhower, could quickly be joined by three more now at sea: USS Ronald Reagan, USS Harry S Truman and USS Theodore Roosevelt, as well as by USS Nimitz. Each carrier force includes hundreds of cruise missiles.

So it goes on – left wing ranting maybe, except that numerous commentators are saying the same basic thing, that the US is gearing up to hit Iran. This has also been one of the explanations for the recent US condemnation of Iran for supporting the Iraqi insurgency.

One usually reliable unpublished source claims that the US has signalled Gulf allies that attack on Iran is possible this year and a "diplomatic source" has said the Bush administration has raised the prospect of a US strike on Iran over the next few months. The sources said US Central Command and the US intelligence community have conducted discussions with Gulf Cooperation Council (GCC) states.

Preparations to defend GCC states against Iranian retaliation have been discussed and Washington has reportedly offered the PAC-3 missile defence system to several GCC states, including Bahrain, Oman, Saudi Arabia and the United Arab Emirates.

The source said Bush and Cheney have advocated a U.S. attack on Iran over the next few weeks in an effort to facilitate British support. British Prime Minister Tony Blair, a strong supporter of the United States, has pledged to resign by May 2007.

We are told also that, the United States "and its allies" will target the oil installations and nuclear facilities of Iran, ensuring there is no environmental catastrophe or after-effects. The Bush administration believes attacking Iran will create a new power balance in the region, calm down the situation in Iraq and pave the way for their democracy project. 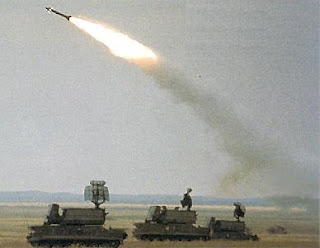 And, for once, the role of the SA-15 air defence system from Russia is highlighted, an issue we have raised several times, notably in January last year and again in the same month.

What few assessments appear to be dealing with is the economic implications, not least the effect on Japan if Iranian oil supplies are interrupted. But, if a strike is made, there will be plenty of time for the MSM to catch up. For the moment though, we will have to watch and wait, in the knowledge that, any day now, we could wake up to find we are spectators of yet another war.