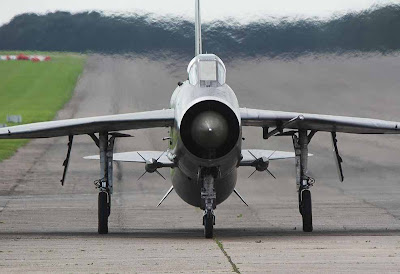 No one, but no one who has every been to an airshow and seen this mighty beast, the Lighting F6, take off could ever fail to be impressed. The re-heat lights, consuming more carbon credits in seconds than Tony Blair consumes in a year, and it hurtles along the runway. The nose lifts and points skywards and the thing climbs near vertical until it is but a dot in the sky, while the hills around still echo to the thunder of the engine.

Perversely, the aircraft came to mind this morning when I read that the government was giving £30 million to local authorities to spend on anti-smoking police and "re-education" measures.

The link is not entirely tenuous. Back in the late 60s, I visited RAF Binbrook to see an operational Lightning squadron at work, at a time when the aircraft was equipped with the Red Top air-to-air missile.

That piece of kit was fitted with an incredibly sensitive infra-red seeker, which enabled it to home on the tailpipe of an enemy jet. But that party trick of the technicians was equally impressive. With the seeker switched on, one of them would light up a cigarette and walk along to the end of a huge hanger. The missile would follow his every move.

Of course now the very idea of lighting up would be verboten, but it struck me that here was a piece of kit that the anti-smoking police would love. Touring the streets in their "Snatch" Land Rovers, fitted with Red Top infra red seekers, they could pick out the errant smoker with consummate ease.

Come to think of it, some of the infra red detection kit on modern UAVs is just as sensitive. Now, there's a thought …

The pic is "borrowed" from the Jet Photos website. Another one worth a visit.