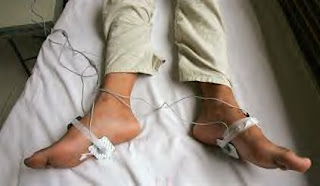 As I recall, when William Hague, the Conservative Shadow Foreign Secretary (for people who may well have forgotten this fact) made his last statement about what foreign policy might be like run by him and the Boy-King, he waffled a bit about us not needing the American alliance any more but having to look to Asian countries, such as India and China. What that sounded like was somebody desperately looking at the map of Asia and repeating names of big countries.

An alliance with India is, indeed, a very good idea, as the government of the United States has recognized some time ago. Those two countries, as well as Australia and Canada, are part of the Anglosphere, with many ideas similar (at least in theory) to Britain's.

China, however, is a somewhat different proposition, though I would not expect the Conservative Party spokespersons to recognize this fact. Naturally, we need to have political and trade relations with the country but a close alliance, one, moreover, instead of the close alliance with the United States, does not sound like such a great idea.

Perhaps, Master Hague would like to think about the recent news from that country he would so like to have a close alliance with. It seems the government is desperately worried about young (and, probably, not so young) people becoming addicted to the internet. After all, they might find things out and that would never do.

Steps have, therefore, been taken to cure people of the addiction, as described by Ariana Eunjung Cha in the Washington Post. Among the methods are mild (by whose standards?) electric shocks. Sadly, the WaPo seems to accept China's own boast that it has dealt with alcoholism and drug addiction better than any other country. Since there is no independent source of information about this we should really take it with a very large dose of salt.

Any point in sending this to Master Hague? Somehow I do not think so.