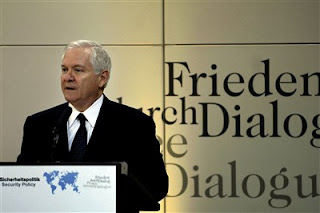 Newspapers only have so much space and broadcasters only have so much time. If they expend it on chasing after 15-year-old David Cameron's drug using habits, or other such trivia, neither time nor space are available for other, more weighty issues. That is the so-called "opportunity cost". By focusing on one subject, you lose the opportunity to deal with another.

Despite the obsession with young Cameron and all things trivial, however, I fully expected at least the heavyweight end of the Sunday media to devote some time to the Nato ministerial meeting in Seville, which has been entirely ignored by the dailies. That used to be something of a speciality of the Sundays – sweeping up after the dailies, addressing some of the issues they had missed.

However, this was not to be, despite the ominous signs of trouble emanating from Afghanistan and the failure, once again, of Nato ministers to agree to more troops for the region.