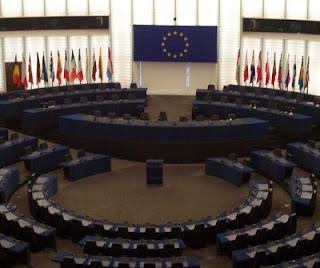 Graham Watson, British MEP and leader of the EU parliament's Liberal group is warning that he and his colleagues do not have enough work to do to keep them busy over the forthcoming year.

Ironically, this situation has developed just as the number of MEPs rose from 732 to 785, to accommodate the entry of Romania and Bulgaria. Thus, as numbers go up, work goes down.

This is attributed, according to Watson, to the commission "pushing ahead with efforts to slash business red tape" and its attemps to "cut the burden of regulation for European companies". "We have all these people, and the commission has taken its foot off the accelerator," Watson complains. "There are very few substantial pieces of legislation this year."

However, Italian MEP Monica Frassoni - co-leader of the parliament’s Green group - thinks she has an answer. In addition to responding to commission proposals for new law, the parliament should propose new legislation to the commission. These are the infamous "own initiative" reports which have no legal status (even in community law) but they are often used by the commission to test the water when it is considering new legislation.

Watson wants to go further, arguing that it was high time for the EU parliament to get more say in areas such as the fight against terrorism and foreign policy – second and third "intergovernmental" pillars from which the parliament is currently excluded.

Parliamentary involvement would have increased had the EU constitution been approved but, with the rejection by the French of Dutch, the status quo is keeping the EU parliament idle. "This has to change," says Watson. "Then there could be real progress in democratising Europe."

Thus is the myth that the EU parliament has anything to do with democracy perpetuated. In fact, Watson, Frassoni et al would serve their fellow "Europeans" by extending their period of idleness as the only democratic EU parliament is an empty EU parliament.