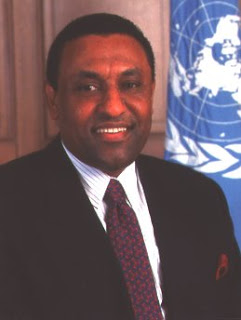 Both the story and the punning title come from one of our readers. He knows who he is and we are duly grateful.

The story, as related by AP (I think they must have got this right as there was precious little digging to be done), concerns the head of the UN intellectual property agency, (World Intellectual Property Organization or WIPO) whose understanding of matters intellectual does not extend to being accurate about his age or, as it happens, qualifications.

Kamil Idris joined the agency in 1982, when the job he got required ten years of professional experience, clearly unlikely in the case of somebody in his twenties. But that did not matter as Mr Idris gave his date of birth as 1945, which would have made him 37. He also gave various rather interesting details of his qualifications and experience. None of these seem to have been checked up.

In 1997 he became director-general of the agency, which oversees world copyrights and trademarks.

Last year, however, Mr Idris suddenly noticed the mistake in his age and changed it to a younger one, assuring all and sundry that he was actually born in 1954. The internal auditor found this a little too difficult to stomach.

The audit said that by changing his age to the younger, Idris could "considerably benefit" by further building up U.N. pension credits before eventual retirement.

The audit also says the change could benefit Idris if he leaves soon because it would make him eligible for a severance payment that could be worth several hundred thousand dollars. The previous age would have made him 60 in 2005 and no longer eligible for severance if he left after that point.

All of which must be a complete coincidence. Needless to say, WIPO is defending the boss, pointing out that he corrected the mistake as soon as he noticed it, which took him well over twenty years but he had other matters on his mind. In any case, this is all about racism.

The new birth date raises questions of what Mr Idris was actually doing in the years before he joined the UN, something that ought to have been checked at the time of his joining but clearly was not.

According to the new birth year, Idris would have been 13 years old when he claimed to have held his first part-time and full-time posts at the national level in Sudan.

"Mr. Idris explained that these were temporary jobs that he assumed since his young age, in order to sustain his family and enable him to study," the report says.

He said in his application that, when he was 23, he was deputy director of the legal department in the Sudanese Foreign Ministry from 1977 to 1978. But at the same time, he was studying at Ohio University nearly 7,000 miles away in the United States.

Idris' 1982 application said he obtained a masters degree in international law from Ohio University in 1978. But Jessica Stark, spokeswoman for the university, told the AP Idris attended from Sept 12, 1977, to June 10, 1978, when he received a Master of Arts in African Studies.

Adding to the confusion, the audit said Idris registered at the university with a third birth date - August 26, 1953, a year earlier than the revised date.

Mr Idris appears to be incommunicado and WIPO tells all and sundry that the actual audit cannot be released as it is confidential. Given that we employ these crooks through our taxes (yes, they can sue if they like), I am not convinced confidentiality is quite what is required here.