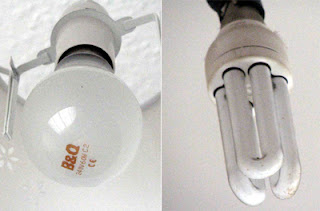 Australia and the Canadian province of Ontario have done it – pushed ahead with a ban on incandescent light bulbs (although no one quite knows what made them so angry).

But now, according to Ian Johnson of The Scotsman, the Scottish Parliament is coming to terms with the reality that it does not have power to follow suit.

Even though switching to energy-efficient models would cut annual carbon dioxide emissions by about a quarter of a million tons a year and save £88 million, the Scottish Executive has no power to ban products. It says that lies with Westminster, a fact which, according to Stuart Hay, head of research and policy at Friends of the Earth Scotland, highlights the "limitations of the devolved powers Scotland has".

But Westminster says EU Single Market rules prevent the UK from acting unilaterally and only the European Union can legislate. And, at the EU level, the process stalls altogether, with countries expressing good intentions, but no sign of impending action.

Funny though, while the Scots seem to find limits on devolved power from Westminster tiresome, when "devolution" seems to be going the other way they seem somewhat less concerned. Yet, as it now transpires, a nation that once had an empire over which the sun never set no longer has the power to change its light bulbs.