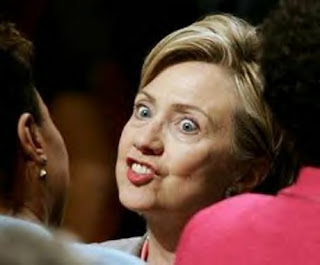 Pamela Meister starts an interesting alphabet on American Thinker with her article, called “A is for Arrogance, B is for Baloney”. I wonder what C might be for? Condescension? Capriciousness?

The starting point of the article is a supremely ridiculous statement by Hillary Clinton, who took time off from bashing Barack Obama to tell the audience in Florida that

When I' m president, I'm going to send a message to the world that America is back - we're not the arrogant power that we 've been acting like for the past six years.

My guess is that people don’t know what arrogant is until and unless Hillary Clinton becomes President. Just remember how arrogant she was when she was merely the First Lady. Pamela Meister reminds everyone of the time she said:

I 'm not going to have some reporter pawing through our papers. We are the president .

I take it, once Hillary is in the Oval Office, if she gets there, poor old Bill will not be allowed to be part of that rather royal “we”. Is this what the American War of Independence was fought for?

What Hillary is talking about is that old chestnut: Bush ignored everyone but America in his foreign policy decisions. Apart from the fact, that this is not true, as anyone who can recall those endless and fruitless discussions in the UN would agree, as would anyone who can add up the number of allies the United States has in Iraq and Afghanistan, what else is he supposed to do? The task of the President of the United States is to look after that country’s and its people’s interests. He may get it wrong; he may make mistakes; he may get the country into a mess through wrong-headed policies (see Bill Clinton or Jimmy Carter). But he is not supposed to look to other people first.

Pamela Meister refers to another article by Kyle-Anne Shiver, which recounts a conversation with, sadly, a Brit in New York City. Sadly, because one would like to think that such arrogant silliness and ignorance would be exhibited by other Europeans but we must all be realistic about the level of knowledge and understanding in this country.

I got into a bit of a verbal tussle with a Brit this past summer - in New York, of course. He was demanding to know why W didn't pay more heed to the European interests before starting a bloody war that involved the whole bloody world. At first, I could barely believe my ears, but then I simply reminded him that we, the citizens of the United States, pay our President to worry about us first - and everyone else after that. He bolted back that, well, Clinton had cared about them! I just said that perhaps that was one good reason why his party was out and the ones who put America first - and foremost - are IN.

One would like to know why the Brit in question thought that European opinion should be sought. Why not African? After all, the people of Africa really have a say in their own governance, do they not? So, they should be consulted about American politics. Or why not Chinese? Or any number of other countries, where governments just happen often in a far more bloody fashion than what has been going on in Iraq?

Pamela Meister’s own rejoinder is good enough as far as it goes:

Another good rejoinder might have been to ask why Europe didn't pay more heed to American interests before starting two terrible wars that involved the much of the world. Neither World War I nor World War II were picnics, and it certainly would have been nice if someone in charge somewhere had asked what America thought beforehand. But most Americans are realistic. They don' t expect France, Germany, or any other country to play "Mother, may I? " with us when they make their foreign policy decisions. Alliances come and go depending on the needs of the day, but the reality is that it has always been every man for himself, and it always will be.

Who on earth are those international interests that the American President is supposed to consult, anyway? The United Nations, a rapacious organization in every sense of the word that is incapable of sorting out its own affairs and is completely unaccountable to anybody?

There is, however, another important issue here, that quite possibly the Brit in question had not grasped. It is one we have written about before. A good deal of the grousing about the United States and its President (particularly Bush) whose powers are so enormous come from sheer frustration, not with American arrogance but with the fact that we no longer have any control over our own governments.

The American people can influence their government at various levels through elections. We cannot.

The whole article reminded me of a conversation I had with a lady who had wandered in to some event at the Institute of Economic Affairs and found herself a little out of things. She harangued me, for some reason I cannot recall, about Bush being the most powerful man in Britain because Blair just agrees to everything he is told.

This is a commonly held and completely erroneous view. Blair has a great deal of influence over Bush. He has not used it wisely or in Britain’s interests. That is all.

Then I proceeded to explain to her how legislation is done and why it does not matter whom we elect to the House of Commons or who is in government. For some reason the lady lost interest in the conversation and wandered off.

Which European interests should the President of the United States consult? And while we are on the subject, when will the European Union consult the interests of the European people?