Mugabe's achievements may be recognized 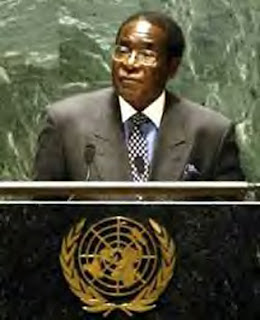 Zimbabwe’s President has banned all rallies in the country as they were disturbing the peace. His peace. The opposition has vowed to carry on and to organize more of them, though the last one had to be abandoned because of the police firing teargas. (Funny, isn’t it, there is always money for teargas, rubber and other kinds of bullets, guns and other suchlike inedible things.)

The economy has been completely destroyed and only aid is keeping people in many parts of the country alive. Though, naturally, a good deal of the aid gets skimmed in Harare by Mugabe, his friends and relations, especially his wife.

The EU has decided to renew its sanctions against Zimbabwe but as these were constantly broken and never really worked, one can ignore it.

Now David Blair of the Daily Telegraph tells us that the UN agency, World Food Programme, who has been so active in North Korea, may well elect Zimbabwe to its vice-presidency, a step towards future presidency.

It seems that the seven African countries on the executive board all favour President Mugabe’s candidacy. No doubt they think this will be an excellent present for the old tyrant on his 83rd birthday tomorrow.