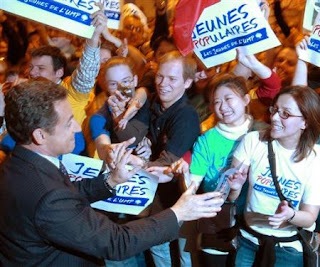 Sweet harmony is not proving to be the rule when it comes to considering the EU constitution. And, while Merkel might have designs of her own, and Daniel Hannan has worked it all out, it seems that French presidential candidate Nicolas Sarkozy has just lobbed a hand grenade into the love-fest.

Chiding the 18 countries that have ratified the treaty for their recent meeting in Madrid, he express his "sadness" that for the first time since 1945, "European countries convened to discuss the future of Europe without France." Declared Sarkozy,"This is not my idea of Europe. To repeat that everything will be OK and change nothing will lead ... to a catastrophe."

The man himself was speaking in Strasbourg to a crown of thousands, unveilling his "European agenda" where, according to AP via IHT he warned that efforts to revive the treaty in its current form were bound to fail.

If he is elected French president, he told the crowd, he would propose a new, simplified treaty that would scrap decision-making by unanimity and create the position of an EU president that would rotate every 2½ years. That, of course, goes right against the grain of the "treaty-lite" and would involve changes that would require the signing and ratification process to start all over again – a huge can of worms for the "colleagues".

And, to add fuel to the flames, Sarkozy said Europe (he means the European Union) was in a "serious, profound crisis". But he rejected the idea that the crisis had been triggered by the French and Dutch "no" votes. The French rejected the constitution because they felt the EU no longer protected them and they were the victims of globalization.

Nailing the coffin down on any prospect of agreement, he then repeated that Turkey had no place in the EU "because it's not a European country". He also spoke against accepting more enlargement, telling the by now cheering crowd that "It is paradoxical that a constitution is being enforced on Europe while its identity is being diluted by enlargements that have no end."

Seem to me that those who see the EU constitution as being a done deal are being a little bit premature. Sarkozy, with a presidential election to win, is pandering to a national agenda and, as always, "Europe" takes second place.