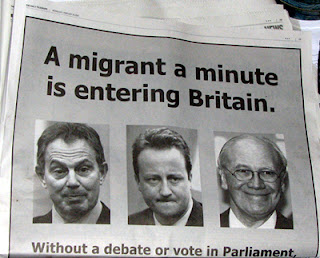 Following on from its launch adverts in October last, the Speakout campaign in back in the fray with a second wave of ads in the national and regional press. The ad copy tells us how:

Without a debate or vote in Parliament our elected MPs have handed control of our borders to the European Union, allowing unlimited immigration into Britain from EU countries.

We are then told that "80 percent of you, the people", want a vote on getting your borders back.

So far so good, but a corresponding entry on the website talks of the "Free Movement of People directive" which:

…was subject to no debate in the House of Commons and no vote, but discussed in a secretive, and largely ineffective, group of mostly Labour MPs, called the European Scrutiny Committee. This Directive renders Britain – and all the other 27 once sovereign nation states that now comprise the EU - effectively borderless provinces in a new country called Europe.

The actual directive to which Speakout is referring is our old friend, with the snappy title of:

But what is a little puzzling is that this is simply a directive which codifies and clarifies the "right of citizens of the Union…". It does not actually confer any rights.

These actually came with the EC/EU treaties and are currently expressed in: Article 14 (7a) ECT: establishing the internal market, which includes the free movement of persons; Article 18 (8a) ECT: Union citizens have the right to move and reside freely within the territory of the Member States; and Article 61 (73i) et seq: new Title IV, "Visas, asylum, immigration and other policies related to free movement of persons".

And, unless I am very much mistaken, all the treaties which currently apply to the UK were in one way or another subject to pretty extensive debate, both in the Houses of Parliament and outside. That is not to say that the debates were by any means satisfactory but the fact of them rather neutralises the point Speakout is trying to make.

This notwithstanding, the campaign got something of a kick when three newspapers, The Sun, The Daily Mail and the Daily Express, all refused to run the add because, they claimed, it was "potentially racist" and possibly "inflammatory". Coming from those three newspapers, says Speakout, "they've got to be having a laugh".

And in that, at least, the campaign has got it right.