The difference is taxing 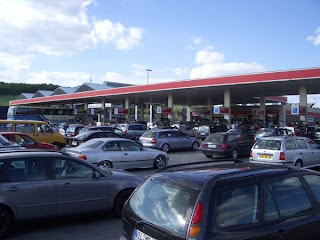 I bet you didn't know that the largest Esso service station in the world is located in one of the smallest countries on earth, in Wasserbillig, Luxembourg - located on the motorway to Germany.

There are eleven multi-product pumps, twenty toilets, shower cubicles and a first aid room. The forecourt covers 2400 square metres and the small supermarket 260, where motorists can find everyday articles and can take a break with a rich assortment of drinks and snacks, from fresh bread rolls to pizzas.

The reason why this is the case is simple – fuel tax is lower in Luxembourg (as is the tobacco tax), so people come flocking for miles around to fill up their tanks and stock up on cheap baccy.

This will not affect the UK which has the highest duty at €693 but Luxembourg charges a mere €285, compared with €470 per 1,000 litres in Germany, just across the border.

A study shows Germans are willing to drive two to four extra kilometres for each euro cent differential in diesel price compared with a neighbouring country, which means that a lot of Germans are doing a lot of miles in what is known as "fuel tourism".

However, according to the Financial Times, Charlie McCreevy, the Irish EU internal market commissioner, and Dalia Grybauskaite, the Lithuanian EU budget commissioner, have forced a delay an announcement that was expected this week "to allow further debate". It will be discussed by all 27 commissioners on Wednesday.

To gain approval for the tax change, voting must be unanimous, with all 27 member states in favour. But, in addition to Luxembourg, Poland and the Czech Republic are also concerned about the tax hike: both are popular destinations for truck drivers avoiding higher duties in neighbouring Germany.

"We are not happy," says a spokesman for Jean-Claude Juncker, Luxembourg prime minister, he who so wanted the EU constitution.

Germany, however, would love the EU to have more power on this issue. A study by the European Commission found that fuel tourism cost Germany an estimated €1.9bn a year in lost tax on diesel, on top of which is the lost duty on petrol station sales of cigarettes.

Nevertheless, with so much opposition, László Kovács may be disappointed on Wednesday, proving the opposite of the current Inland Revenue slogan – that taxing can be very taxing indeed.