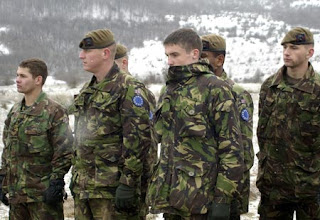 With the withdrawal of 600 British troops from Bosnia – announced by defence secretary Des Browne on Monday – we now learn that the EU force to which they were attached is also to be reduced. EUFOR, as it is known, is gradually to be cut from 6,000 to 2,500 troops, achieving its new level by early June.

The EU took over in December 2004 from a NATO peacekeeping mission and launched an operation called ALTHEA, backing up around 16,000 Nato peacekeepers in Kosovo. The reduced EU force will continue to operate under a UN mandate which was given a yearlong extension by the Security Council in November.

The operation was the first in which EU-badged troops were seen to operate, with even our own Grenadier Guards wearing the hated "ring of stars" (pictured above), although it is interesting to see that two of the lads seem to have lost their badges. 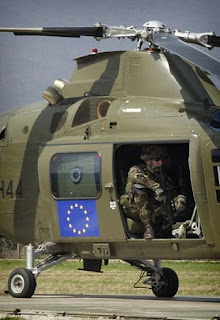 Such was the initial enthusiasm for the EU identity that, in April 2005 a demonstration of EUFOR helicopters, held on Camp Butmir (Sarajevo) saw Italian Army A-109 helicopters also badged with the ring of stars (right). British Lynx helicopters carried no such markings. However, with EUFOR equipped to insert 150 troops in one wave of helicopters, it was at times better equipped than British forces in southern Iraq.

Fortunately though, the British departure will now mean that there are no longer any of our troops bearing EU markings. With that and the despatch of 1400 personnel to the Nato force in Afghanistan, this marks a decisive shift from the EU sphere of influence to the Nato/US domain.

It is one small sign, but it could indicate that the high-water mark of British participation in European defence integration is past. The tide retreats.