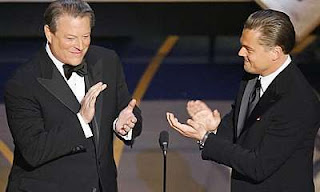 As the MSM fawns over Al Gore getting the Oscar for the best fiction .... oops ... sorry ... documentary around and the news goes round the world that the former Veep's (no, he did not win that election, no matter what the Hollywood luvvies say on the matter)

which is not even being denied by the Gores, we get this shock horror news item in Britain: "Second Warmest Winter Ever Recorded".

Temperatures averaged 6.5C (43.7F) this winter, from December to February, MeteoGroup UK - the weather division of the Press Association - said.

Well, that's quite warm, though not the warmest (and certainly not the driest, despite threats of overwhelming drought). But stay, the article finishes with the following comment:

The Met Office point out that this winter has been the second warmest in the UK as a whole since 1914.

I assume the problem lies in different figures including different months.

Michael Dukes of MeteoGroup UK said: "This winter's exceptional warmth is made even more remarkable by that fact the preceding autumn was the warmest on record. Indeed, the non-calendar year from 1 March 2006 to the end of February 2007 is the warmest 12 month period England and Wales have experienced since temperature records began in the 1650s. Although not proof of human-induced global warming, these records are yet more evidence in support of a rapidly warming climate."

Well, no, this is no proof of human-induced global warming despite Al Gore's mansion and constant use of a private jet. It might be proof of a rapidly warming climate but, actually, it is proof that average temperatures go up and go down. In other words, we still do not know what is really going on with the climate, let alone how it affects the weather.

The "human beings cause global warming and it will destroy the planet" fanatics, just as their predecessors of "the earth is getting colder and it will destroy the planet" variety seem to have reverted to a pre-scientific attitude to the problem of climate and weather. Every change to colder or warmer is seen as catastrophic rather than cyclical or manageable. Will they think the end of the world has come at the next full solar eclipse, I wonder.