"Shambles" is too mild a word 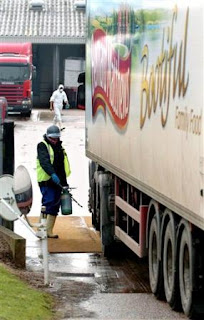 The newspapers have much to say about the continuing developments in the Bernard Matthews avian flu outbreak, typical of which is the coverage in The Sunday Times which highlights the "Scandal over bird flu imports".

Says the newspaper, the government allowed Bernard Matthews to continue importing turkey meat from a bird flu-hit region of Hungary even though it suspected the area was the source of the British outbreak. We are told that a consignment of 20 tons of turkey was imported last Tuesday from a slaughterhouse in Hungary, three days after avian flu was confirmed at the Bernard Matthews plant in Suffolk.

Government inspectors knew in advance that Bernard Matthews intended to import the meat from a slaughterhouse only 30 miles away from the Hungarian outbreak – but did nothing to stop it.

We are also told that a spokesman for Defra yesterday admitted that it had the power to block such meat imports but had decided not to do so. Ben Bradshaw, the agriculture minister, is said to be blaming the failure to act on fears of retaliatory action against British exports by other European Union states. "There was a fear that if we were to ban imports from Hungary, other countries could treat British exports in the same way," he is cited as saying.

Booker, in his column, has a different "take" on the affair. He remarks that, since the operation was supposedly supervised at both ends by vets acting in accordance with EU procedures, it marked a serious failure of the EU's system for controlling the spread of animal diseases.

Such are the joys of the Single Market, he writes, since those controls rest largely on paperwork which cannot necessarily be relied on. Gone are the days when teams of health officials were stationed at our ports to inspect each consignment of food or animals as it came in.

Booker also adds that what is most shocking about this latest episode is how it recalls the Government's astonishing mishandling of foot and mouth in 2001. 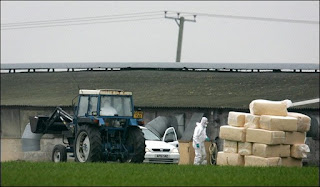 The reasons why that episode was ramped up into an unprecedented crisis stemmed from a fatal combination of our need to comply with EU laws and the almost insane refusal of our own officials (then in the Ministry of Agriculture, now transferred to the Department for Environment, Food and Rural Affairs) to heed the pleading of all the genuine experts that the way to halt the spread of a viral disease is to use the same technique that is used by almost everyone in the world outside the EU: namely mass vaccination.

In 2007, as six years ago, we have seen the Defra officials imposing the EU's "3km protection zone" and "10km surveillance zone" round the Suffolk plant.

Again, under EU rules, we have seen the same transporting of thousands of potentially infectious dead animals across miles of countryside, under plastic sheeting which defies proper "biosecurity". And again we have expert virologists, such as Colin Fink of Warwick University, staring open-mouthed as they point out how Defra could hardly be getting everything more wrong, above all in the absurdly unscientific misinformation it spreads about why we cannot use vaccination.

What makes all this still more pitiful is to recall how, after the F&M crisis, we had that raft of bogus official inquiries - remember "Lessons Learned"? - from which we were supposed to learn how not to repeat 2001's mistakes.

As has become horrifyingly clear in the past few days, neither Brussels nor Defra, with its insatiable lust for mass-slaughter, have learned anything. Given the chance, they would make just as much of a shambles now as they did last time.

For those of us who are used to dealing with the loathsome institution that is our government, we note an interesting phenomenon in that people who specialise in dealing with one particular ministry always rate theirs to be the worst. Yet, when it comes to sheer consistency and scale, it would be very hard to beat Defra. The combination of this dire ministry's innate characteristics and the dead hand of Brussels seems to have created a monster of absolutely terrifying incompetence.

For an organisation which leaves in its wake the wreckage of a farming industry - after the collective disasters of salmonella in eggs in 1988, the listeria crisis and the treatment of the cheese industry, the catastrophic handling of BSE, through to Foot and Mouth, the total incompetence in its handling of Bovine TB and now, avian flu - "shambles" is far too mild a word.