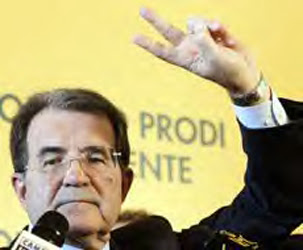 Back in April 11, the newly elected Prime Minister, still in dispute about who is to form the Italian government, said:

We will always be united. We will govern for five years.

Did he believe it at the time? For ourselves, this blog expressed a certain amount of doubt on the subject, if for no other reason that the arithmetic did not give Prodi the chance to govern for more than well, let us say, nine months from when he finally took office. Not a bad record for an Italian Prime Minister but not really close to that of his hated rival, Silvio Berlusconi.

What will happen now to Prodi’s campaign to abolish capital punishment across the world (with the exception of China and various Arab countries that are not Iraq)?

Of course, you must understand, this does not mean that Signor Prodi will retire to the back benches. For one thing, the President, Giorgio Napolitano, has asked him to continue in a caretaker capacity. For another, it seems that there is a growing support for the idea of another Prodi government.

According to an AP writer (and I do think they must have got this right):

"We are ready to reconfirm our full faith in the Prodi government," said Dario Franceschini, a leader of the Olive Tree, the largest grouping in Prodi's coalition.

Oh that’s nice. I am sure Signor Prodi will sleep better for that knowledge. At least, none of them said that they were right behind the man. Not yet, anyway. 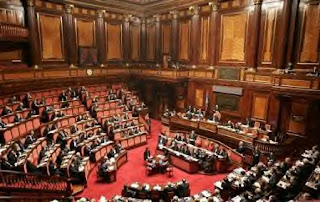 The problem seems to have come from a debate in the Senate on foreign policy, attended about as well as our own debates in the Commons tend to be, if the picture is anything to go by.

Under discussion was Italy’s military mission to Afghanistan, organized by Silvio Berlusconi, which is in something of a limbo at the moment.

Italy has 1,800 troops in Afghanistan, which were sent in by Berlusconi. The current government has agreed to keep the troops there, sparking opposition from its own Communist allies.

A decree refinancing the Afghan mission is awaiting parliamentary approval. It was passed by the Cabinet last month, but three radical leftist ministers walked out of the room to signal their opposition.

The Foreign Minister, Massimo d’Alema, tried to rally the coalition but failed. The vote was lost by two votes. In the Lower House, Prodi’s support is more secure and, we must assume, he will be able to negotiate another coalition for another government.

It’s great to have the old Italian politics back with us. Happy days are here again.