"Lift high the flag of Ghana" 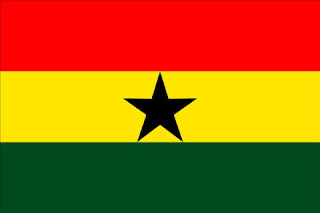 This was the first line of the Ghanaian national anthem when it became an independent country fifty years ago, the first of Britain's African colonies to do so. The words were wonderfully solemn and old-fashioned, with much emphasis on duty, work and freedom. Ghana was going to be a shining example to the world of a post-colonial political entity.

The words were changed in 1966 after its Marxist dictator, Kwame Nkrumah, who had gradually destroyed the democratic and economically relatively free (this was the 1950s and 1960s after all) structure, had been ousted while on a visit away from the country.

The new words are more modern and less specific with more emphasis on advancing and African unity.

In 1957 when Ghana became independent it was a relatively wealthy country. Its present and future was contrasted advantageously with that of South Korea by all the pundits. Ghana was rich, democratic, full of natural resources. South Korea was none of those things and what was going to happen to the country.

Well, fifty years on, we know the answer. By African standards, Ghana is not doing too badly. South Korea has shot ahead to become one of the world's fastest developing economies and a serious threat to the sclerotic economies of Western Europe. Presumably, when Segolene Royal promised to introduce measures to control globalization, South Korea was one of the countries she had in mind (if she had anything specific in mind, that is). It was not Ghana, you may be sure.

So many things went wrong that it would be hard to enumerate in this posting. In any case, the arguments have been put far more cogently by Franklin Cudjoe, Executive Director of the Ghanaian free-market think-tank IMANI, and Evans Selorm-Branttie, its Communications Manager.

IMANI and its small staff have been stalwart fighters for economic freedom in Ghana and in Africa as a whole.

There can be no question about it, the twin causes of Ghana's downfall from its advantageous position fifty years ago are the Marxist, socialist experiment that was imposed on it in the name of something called "the African way"; and the indiscriminate aid that poured in from Western countries whose leaders were trying to assuage historic "guilt" without bothering to find out what actually happened to the money.

Both of these are now so ingrained in geopolitical calculations that one wonders, rather despairingly, whether the African countries, so rich potentially, will ever climb out of the mire.
Posted by Helen at 17:00