We really are not that stupid… 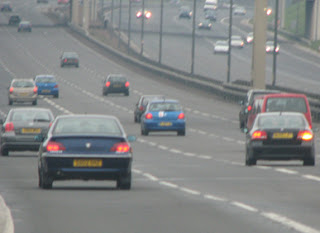 If politicians wish to find out why we hold them in such low regard, they need go no further than look at the wunderkind transport secretary, Douglas Alexander, who is trying to tell us that the satellite road charging system he proposes would not involve an invasion of privacy.

It is The Register, however, that notes that Alexander has also promised there would be "safeguards" to deal with the privacy issue.

Observers of the government data kleptocracy, The Register continues, will be familiar with the "safeguards" gambit, and of course one would not need to implement privacy safeguards if one were not threatening privacy, right? "So it's not exactly a denial", it concludes.

In fact, anyone familiar with the workings of satellite-based road charging systems will know that the privcy issue lies at the heart of the proposedsystem. Its central feature is differential pricing according to location, time and distance travelled, which can only work if the whereabouts of vehicles are known whenever they are on the move.

As far as safeguarding data goes though, as we noted earlier, promises on protection of data are not Alexander's to give. All we need is an EU agreement that information should be "shared" (i.e., given to government agencies) and the game is over.

And, when the technology exists for police to interrogate the on-board computer of any car – in real time - one can see that the attraction of the system would make it irresistible to enforcement agencies and sundry government officials.

But then, as the Telegraph tells us this morning, the "debate" – if you can call it that - is a sham. The decision has already been made.

Furthermore, un-recorded by the media at large, the Department for Transport has already expended massive sums on the EU's Galileo system.

In all, taxpayers have already "contributed" an estimated £200 million to the system at the heart of the road charging system. The government is not going to be expending that sort of money without looking for a payback and, as we know, it is already in discussion with a German technology company about implementing systems.

Slowly, therefore, people are getting the picture, and they like not what they see. That is undoubtedly why the petition is now up to 1,401,511 signatures - from 1,369,970 last night. And it looks set to reach two million by the time it closes on 20 February. The government is going to have to come to terms with the fact that we are not all as stupid as it thinks.