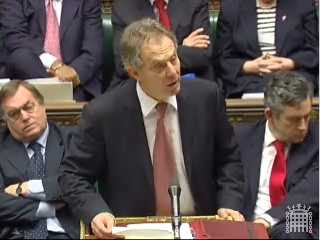 As flagged up, last night, by the BBC and others, at 12.30pm today Blair made his statement on "Iraq and the Middle East".

What is happening in Basra, he told a crowded House of Commons chamber, is of "huge importance". But, he said, "The next chapter in Basra's history can be written by the Iraqis".

And to help them write it, Blair announced an initial reduction of our forces from 7,100 to roughly 5,500. With the exception of Basra Palace, the troops will be stationed at Basra Air Station. The bases at Shatt al Arab Hotel, the Old State Building and the Shaiba logistics base will be handed over to the Iraqis.

Over time, added Blair, we will be able to draw down further, possibly below 5,000 when Basra Palace has been transferred to the Iraqis in the summer. Increasingly our role will be support and training and the numbers of our forces can be reduced. 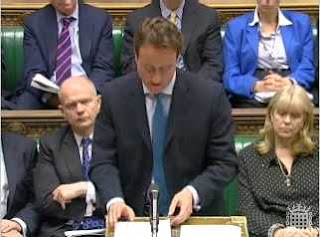 The Boy King immediately responded by welcoming the withdrawal of "1500 troops" but expressed concerns about the "safety and security" of the troops that will remain. Anyone who has been there can see how the security situation has deteriorated. What steps was the prime minister going to take to protect our troops, and would they be given the equipment they needed? And, said the Boy, we need the "soft power" of diplomacy as well as military force.

Blair, of course, waffled. "It is very important that we do everything we can to protect our soldiers - their capability remains undiminished and we will make sure that they have the equipment and protection we can give them."

Yeah, yeah. More, when we have the official transcript.

And, according to the BBC website, Denmark will withdraw its troops from Iraq by August. The troops, numbering about 460, will be replaced by a unit of nine soldiers manning four observational helicopters.