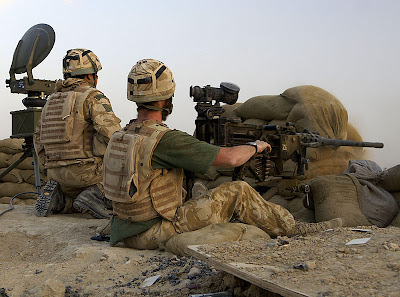 Forget the hirsute Marine clutching the M2 (aka .50 cal Browning) and look at the bit of kit on the left. This is the "Saturday toy", a little gem that goes by the name of MSTAR, standing for "Man-Portable Surveillance and Target Acquisition Radar", It was originally developed by Racal for the Army in the late 1980s and first issued to British forces in 1990 (replacing the replaced the ZB 298, which did sterling work in Oman and elsewhere) – and has been upgraded several times since, being currently produced by Thales. 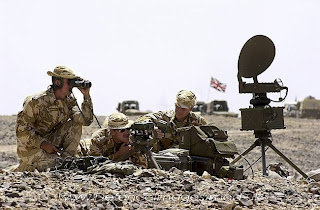 Initially issued to artillery units, with which forward observation posts are able to monitor the fall of their own shot (seen here in the Gulf War), the radar has a much more interesting use of acting as a movement sensor, being able to detect a human figure at a range of up to five miles and vehicles out to about 20.

It is in this role that we probably see the example at the top of this post, in an official MoD photograph, showing India Company Royal Marine Commandos at work in Garmsir during operation Glacier 4, taken recently by Petty Officer Sean Clee.

The particular value of the equipment is that it gives coverage during the hours of darkness well beyond the range of optical night-sights, adding another dimension to the technical superiority that Nato forces maintain over the Taliban. 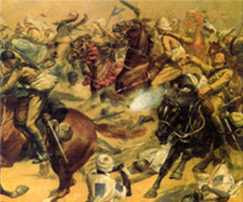 It is such as this that gives us the edge and, used effectively, with good tactics, good leadership and enough troops, does mean that we can prevail against an old enemy. This is not the British Army of the 19th Century, and nor is it the badly trained and equipped conscript army of the USSR.

Hence, one rather wearies of hearing the likes of Christina Lamb – as we did on the BBC Radio 4 Today programme this morning. Her great claim to fame is being embedded with a detachment of the Paras when it was bounced by Taliban fighters, recounted at length in The Times which now seems to qualify her to complain that sending more troops into Afghanistan means they are acting as a "magnet" drawing more Taliban into the fray.

What Christina and her follow travellers seem to have difficulty in coming to terms with is that the primary purpose of putting armed, highly-trained troops into theatre is to kill enemy fighters. If the presence of those fighters under the right conditions pulls them under our guns, whence they are slaughtered, then the purpose is served. Only when these people learn that they cannot get their way by force of arms will they start listening to saner voices.

As it stands, the real barrier to our overall victory seems to be our own generals, who seem to have more in common with the Christinas of this world than soldiers. If they had more confidence in our ability as a nation to deal with the likes of the Taliban, and properly used the resources available to them, we might all be better off.