Then there were nine... 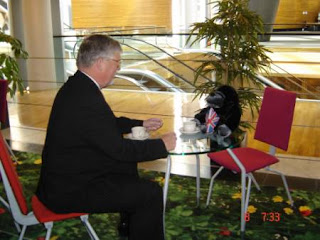 Following the weekend publicity, now, according to a news release from UKIP, MEPs have today decided to suspend Tom Wise (seen here discussing his future with a colleague) from the UK Independence Party group in the European Parliament, "for failure to provide information regarding alleged financial irregularities that are now under investigation by OLAF (the European Anti Fraud Office)".

Party Chairman John Whittaker said, "This decision should in no way be interpreted as prejudicial to the outcome of that enquiry. The decision was taken at a meeting of the MEPs in Brussels," said Dr. Whittaker, "which was the first opportunity we have had to discuss this matter."

From the high in 2004, when 12 UKIP MEPs were returned by the electorates, this now reduces the number holding the whip to nine. And, by next week, there may be more in the frame.

Not entirely unrelated, Guardian is reporting that three of Party's MEPs are on the verge of walking out of the party, prompted by the decision to suspend Wise.

Sources indicate that these MEPs are concerned at the cracks in the previously solid front which had Farage maintaining, of Wise, "We did not believe there had been any intent of fraud."

Despite Whittaker's careful statement, Wise's suspension is de facto recognition that he was fraudulent in the appropriation of his EU expenses. But what concerns the MEPs is that the Party's action implicitly condemns practices which other have also been involved in, weakening any defences they may have in the future.

Whatever the outcome of further investigations, however, UKIP - as my colleague points out - is a very necessary force in British politics. Party officials need to get grip, firmly and decisively, before, like the ten green bottles, there are no MEPs left standing.

The Times names two of the MEPs at odds with Farage over the suspension of Wise – Roger Knapman, the former Party leader, and Mike Natrass. The third is believed to be Gerald Batten, UKIP's London MEP.