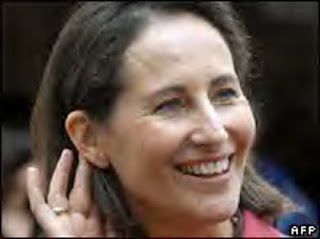 Harriman House, which has just published the English version of Nicolas Sarkozy’s autobiography, is bringing out a biography of his rival Ségolène Royal in March. Naturally, they are interested in many things to do with the lady and have very usefully provided a full translation of her pact with France and the “hundred propositions so that France can rediscover a shared ambition, pride and fraternity”.

In the way politics seems to be done these days (though not, one must admit by Sarkozy) Royal has consulted many people and have come up with a distillation of what they told her.

More than 6000 debates have been organised throughout the country. I have received over the internet 135 000 contributions. I have listened to the employers and the trade unions, I have met with associations, I have consulted experts.

Many of you have wanted to take part in this joint effort. I wanted this work of listening and confrontation of ideas. I wanted citizens to speak again so that I might be their spokeswoman: you no longer accept the composition in private of projects that are forgotten as quickly as they are written. Promises must be kept and they must be credible.

Well, that’s nice. So what are these 100 promises?

Well, to start with, they promise no reforms to a country that is in serious economic difficulties, with high unemployment and is constantly haemorrhaging some of the brightest and the best to other countries.

Massive investment in research and development; Put in place an industrial policy that prepares for the future and reduces the risks of delocalization; Support small and medium-sized businesses through the creation of regional participation funds and by reserving for them a percentage of public contracts; Give priority to business investment by lowering tax where the profit is reinvested and increasing it where it is distributed to shareholders.

In other words, more government control and more interference. The lady shows no signs of understanding how an economy functions but prefers to follow her very French instincts: nobody can possibly do anything unless officials tell them how to do it.

It doesn’t get any better with increase of the minimum wage (that should sort those unemployed in the banlieux out) and pensions. The 35 hour week to be kept on (to be fair, even Sarkozy has not dared to touch that).

Something called housing security for life, which involves building 120,000 “social dwellings”, possibly of the kind that are already pitted round the big cities, a year with rights to buy after 15 years.

What she does not explain is how she is going to pay for all this.

Job security for all is to be provided through expensive schemes, which are unlikely to create jobs. Globalization is to be fought at all costs. Various taxes to be increased and so on and so on. She even commits the cardinal mistake of assuming that she can somehow change the remit of the European Central Bank.

Read the whole thing and start worrying that this woman might become President of France, thus becoming part of our government as well.