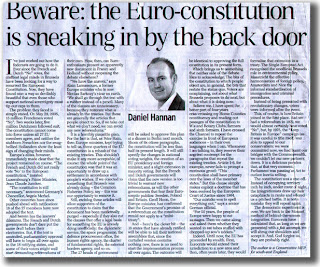 Daniel Hannan does a halfway creditable job today in the The Daily Telegraph trying to draw attention to the shenanigans going on with the EU constitution, and how the "colleagues" are attempting to rig it.

He also ups the ante with a new blog, or "clog" in the corporate DT style, re-visiting a well-worn theme of how MEPs are rigging their expenses.

Both subjects are meat and drink to Eurosceptics but, I suspect, apart from earning young Dan a generous stipend from the Telegraph, the articles are going to have very little impact. If people were sufficiently motivated to protest about them they could go rushing to the No. 10 petition site and sign up to the repeal of the 1972 European Communities Act which, at the time of writing, stood at 162 signatures.

By contrast, the petition on road charging currently stands at 1,702,346 and will finish today somewhat higher than that and, while it has been going slightly longer that the ECA petition, I am willing to take any bets on the proposition that the Eurosceptics are not going to muster a fraction of that level of support.

Even if they did, what then? With 1.7 million signatures in the bag, the road-charge protesters are going nowhere because the government has already decided that it is going ahead with road charging, come what may. And the money has already been allocated.

This comes in the form of the Transport Innovation Fund (TIF) which was announced in July 2005, with the first annual tranche of funding to be allocated in 2008/9 of £290m, rising to £2.5 billion in 2014/15. In all, £9.4 billion has been earmarked and, as the West Midlands Transport Plan points out, the TIF is the only source of significant extra transport funding available for the foreseeable future.

The West Midlands was awarded £2.6 million of pump priming money from TIF in November 2005, but the largest share of funding awarded. £600,000 of this funding - matched by funding from the Metropolitan Authorities - is paying for the initial £1.2 million congestion feasibility study. The remaining £2 million of funding is a commitment from Government should the West Midlands continue with its congestion investigations beyond the first stage feasibility study.

To make this perfectly clear, on 8 February, the government issued guidance for local authorities in England, making it perfectly clear that the road pricing element was an integral part of the TIF programme

In this "guidance" the government tells local authorities that it is "currently looking at the feasibility of introducing a national road pricing scheme around the middle of the next decade" but, it says, "we do not need to wait for a national scheme…". They have thus been "focussing our efforts and resources on local schemes where congestion is already, or soon will be, a problem."

But the Department for Transport then goes into great detail on how these scheme must be compatible and interoperable, in accordance with the EC directive. from which the master plan is clearly apparent. The government intends to fund local authorities to set up theith own schemes which, by 2015 will be so numerous that it will be able to link them up to form one continuous national scheme.

This has been picked up by The Times today, with a rather ill-informed headline that refers to a mere £1.4 billion of the TIF. But the sustance of what it says is clear enough: "The Government is attempting to 'blackmail' local authorities into introducing congestion charging by refusing to fund public transport schemes unless they are linked to a new tax on motorists."

Actually, scratch "attempting". The scheme has been set up and that is the way it will work. Local authorities do not have to take part in the scheme, of course, but if they do not, they will not receive any money from government.

Now… the point. If the government can so easily run roughshod over public opinion on such high profile issues as road charging, where 1.7 million people have very publicly nailed their colour to the mast, what price a reaction to a petition on the European Communities Act, which will only attract a fraction of the signatures? If it achieves anything, that petition will serve only to show how weak the Eurosceptic movement really is.

As to the rest, it is not, of course, that people don't care – as some of the more rabid Tories will claim. It is simply that people do not generally concern themselves with things that appear to have no direct relevance to them or which, they feel, they cannot change.

Thus, the European Union will only be taken seriously when one or other of the political parties take it seriously. And here perhaps is the opportunity that young Dan should be pushing for – a commitment from the Tories to a referendum against the "constitution lite" that seems to be in the offing, something which the "colleagues" are keen to avoid.

That, at least, will put some energy into EU politics that, at the moment, is sadly lacking. Even then, there is a catch. If the colleagues have their way, it will all be done and dusted by 2008, before the next general election, making any such a commitment irrelevant. Where do we go from there?