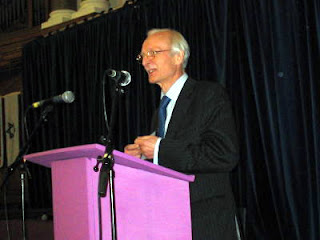 The sum of £363,697 is to be demanded from the UKIP by the Electoral Commission, in an unprecedented move to recover "impermissible donations". The sum relates to 68 separate donations made by UKIP's key supporter, ex-bookie Alan Bown (pictured left), who gave the money for the 2005 general election campaign.

The Electoral Commission has established that, in contravention of the Political Parties, Elections and Referendums Act 2000, Bown was not on the UK electoral register for the period over which he gave the money – mostly through 2005. Under the Act, where parties receive donations which they are prohibited from accepting, the have 30 days from the date the donation was received to return, otherwise it is at risk of forfeiture.

The application of the law, made to prevent foreign backers bankrolling UK parties, has stunned UKIP. Bown had made his money in the UK, had paid British tax and, throughout the whole period, had been living in the UK.

The Commission has notified treasurer Bruce Lawson that it intends to apply to the Magistrates' Court for a "forfeiture" of the cash, which – if the Commission is successful - will then be paid into the "Consolidated Fund" and kept by the Treasury.

Technically, the treasurer has also committed an offence, punishable on summary conviction by a £5,000 fine or 6 months imprisonment. The Commission has not indicated that it intends to proceed with any such case. 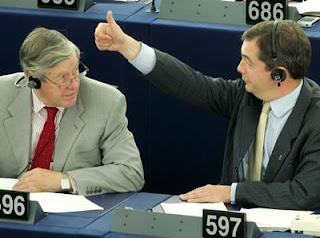 UKIP leader, MEP Nigel Farage (right of picture) has indicated that the Party will fight the forfeiture claim, not least because, if it is forced to pay the money, it will be bankrupt. Insiders believe it would then be very hard for the Party to survive.

However, the demise is by no means certain as the Magistrates are afforded discretion under the law as to whether they make a forfeiture order. Under the circumstances, they may consider a technical offence not to warrant such an action.

The party also faces fines totalling £1,500 for filing its accounts "unacceptably" late – six months after an already extended deadline - while Farage's South East Region is to be fined £500 for being more than six months late with its accounts.. The Commission also said that it was to review UKIP's "systems for dealing with its financial affairs and meeting statutory reporting requirements".

And, in a separate move – reported by The Financial Times - a major Tory donor has withdrawn support for what he terms the "red herring" UKIP, in what is seen as a boost to the Boy King in containing threats of defections from his party's right-wing.

This is Lord Kalms, who had warned earlier this year that he would consider voting for UKIP. But he now tells the FT that he now considers the party "a bit of a red herring… I'm not going to give them money".

Under siege last weekend from two Sunday newspapers, and with further investigations threatened, from the police (over certain sexual irregularities) and from the EU's anti-fraud office, OLAF, it is no understatement to say that the party is not having a happy time of things at the moment.

No wonder Nigel Farage has been seen tired and emotional in Strasbourg recently.