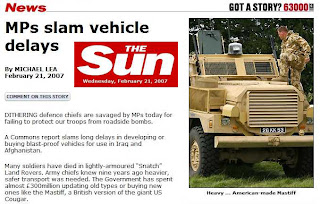 At the heart of the dishonest and inadequate Defence Committee report on "The Army's Requirement for Armoured Vehicles: the FRES programme" lies a failure of the Committee to explain what FRES actually is.

That, most likely, stems from the fact that the MPs themselves do not understand what it is.

Although I have done this before (not least, here, here and
here), let me attempt to summarise it in this post for, without that basic understanding, you cannot even begin to appreciate the issues involved.

Essentially, this is a child of the post Cold War period, when the US and European government started to confront the idea that dealing with the world's hotspots required highly mobile, air-portable forces which could be shipped out at very short notice to deal with trouble as it arose, rather than letting the situation deteriorate to the point where larger ground forces would be required.

The concept crystallised in 1998 when the MoD decided that the UK Army required a fleet of armoured vehicles to fulfil what was termed the "expeditionary role", which was envisaged in the Strategic Defence Review, and then formalised as the "rapid reaction force", aimed at serving both the EU and Nato requirements.

Now, the trouble was and is that the basics of armoured warfare were incompatible with the requirements of air-portable rapid reaction forces. In the former, this had evolved to spawn two main vehicles, the Main Battle Tank (MBT) and the Mechanised Infantry Combat Vehicle (MICV), the first providing the direct firepower, the second providing the infantry support. 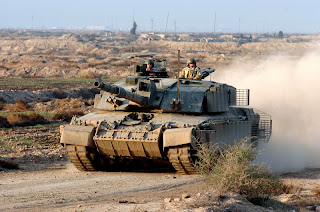 In the MBT had evolved the optimum balance of three requirements: speed and manoeuvrability, armoured protection and firepower, emerging in its current form as the Challenger II (pictured) in the British armoury (and the Abrams in the US armoury), weighing in at around 65 tons.

To enable the maximum number of vehicles to be delivered, however, it was necessary to restrict weight to that which could be carried by the most common military airlifter, the C-130 Hercules, dictating a maximum weight of between 18-22 tons. This meant that military planners had to develop an armoured vehicle which could afford the same overall protection and performance of the MBT but came in at less than a third of the overall weight. (Pictured below is the "SEP" prototype platform, being considered for FRES: various versions will be produced, including an APC and a "direct fire" MBT equivalent.) 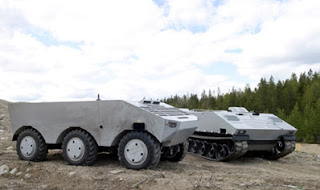 Ostensibly, this would have been impossible, except for the emergence of new technologies, enabling vehicles to shed weight, in the form of less armour, in exchange for three attributes: "situational awareness", "network capability" and high-precision stand-off weapons.

Using an elaborate system of high-tech sensors and reconnaissance systems, the new forces could detect the enemy earlier and at greater distances than before. With advanced electronic networks, that information could then be shared in real time, so that all mobile assets would be immediately informed of the presence of threats that could harm them, long before they came into range. Then, with those threats located, a whole range of weapons could be employed to destroy them, without their ever posing any danger to the lightweight vehicles. 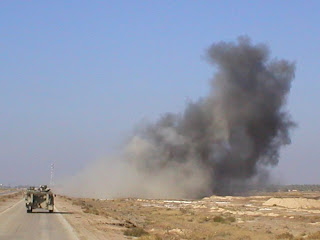 That was the theory which drove what became known as the Future Rapid Effect System. But, by late 2003, the shooting phase of the Iraqi invasion had passed and the war had moved into an insurgency. There, the enemy's weapons of choice became the roadside bomb (IED) and the RPG fired by insurgents in civilian clothes who would not declare their identities until the moments they fired.

For dealing with this situation, any idea of relying on "situational awareness" and stand-off weapons, which underpinned the whole concept of FRES, became totally unrealistic.

Meanwhile, to deal with the insurgency, as we recorded, our then CGS Mike Jackson was trying to make do with "Snatch" Land Rovers. But, as the wider lesson of the insurgency were learned, planners were left to look at ways of improving the protection of FRES vehicles.

The task was effectively trying to square the circle, which they attempted by using additional sensors and self-defence equipment, plus increasingly esoteric forms of armour. Each added to the weight, eventually making the proposed vehicles too heavy for the C-130 and, possibly, too heavy for the A400M, should these ever be acquired.

Thus, at the heart of the conundrum is a conflict – which the Defence Committee acknowledges - where "the MoD", it says, "wants a vehicle which has sufficient armour to protect soldiers from IEDs and RPGs but which it also light enough to be transportable by air." 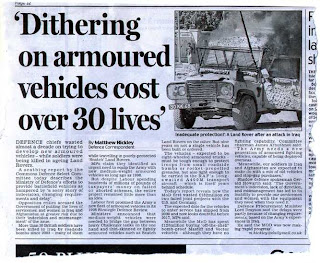 Now we come to the nub. The Committee says that seeking a perfect solution is "unrealistic" and that it is high time the MoD decided where its priorities lay. And that is where the dishonesty lies. The underlying decision is not one for the MoD but one for the politicians.

Essentially, what we are talking about are two different things – FRES-type vehicles for conventional warfighting, and completely different vehicles for counter-insurgency operations. It was never the case that "dithering" over the final shape of FRES cost any lives. The demands of the two types of warfare are so different that it is impossible to combine the requirements for both in a single platform. We need two completely different ranges of vehicles and the lives were lost because of the failure to provide suitable, non-FRES vehicles.

Currently, we still need the decision as to whether we are going to undertake "warfighting" or counter-insurgency operations – or both. And that, as we say, is a decision which must be made by the politicians.

Where the MoD has gone wrong, if it has, is in not making that abundantly clear to the Defence Committee - not that the MoD was actually asked. Now, it is left to Lord Drayson to explain the facts of life to the MPs. The FRES programme, he says:

…should not be confused with the recent urgent operational requirements to procure additional protected patrol vehicles to complement Snatch Land Rovers in Iraq and Afghanistan. The recent and very rapid procurement of vehicles such as Mastiff, Vector and Bulldog, is not related to the FRES requirement. These patrol vehicles are important additions to the capabilities at the disposal of commanders, but are separate from the FRES programme. 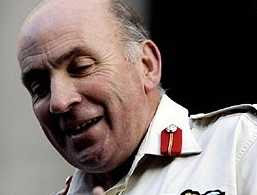 That much was the real message CGS Richard Dannatt was giving last October, effectively a plea to pull out of Iraq, thereby saving FRES and keeping the Army in the shape the generals wanted.

For the political glitterati (aka clever-dicks), of course, all this will pass them by without disturbing so much as a hair on their carefully coiffured little heads. Yet, at those different levels, political and technical, the Defence Committee report marks an important turning point in the decline of this nation.

Future historians will see in it evidence of the total failure of the parliamentary system, a victory of the Army over the politicians and a retreat from any attempt by this nation to recognise what is needed to deal with the growing threat of militant Islam. For, what the report does is fail to recognise that the Army needs to equip to deal with the Islamic counter-insurgency, wherever it occurs, and that FRES is not the answer. More importantly, it fails to understand that role of the Army brass in sabotaging attempts to ensure that our armed forces are properly equipped to deal with the job at hand.

Thus, the MPs have let the Army brass get away with it. Meanwhile, as ill-equipped troops are pulled out of Iraq in an ignominious retreat, the national interest – to say nothing of the interests of our troops in the field and those of the Iraqi people - has been put on the back-burner.