"UK doubles naval presence in Persian Gulf" screams the headline on the Telegraph website. The story tells us:

Britain's senior naval officer in the Persian Gulf has revealed that Royal Navy deployments in the region have doubled since October in a build-up that matches the rapid escalation of American maritime firepower.

The extra firepower is HMS Cornwall, a type 22 frigate, two mine sweepers, HMS Ramsey and HMS Blythe, and a vessel from the Royal Fleet Auxiliary. And this matches the rapid escalation of American maritime firepower? 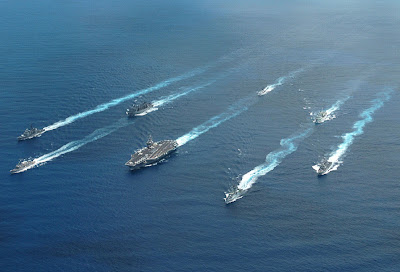 As I wrote over a month ago when we covered the story, and the US were putting in two carrier groups (one illustrated above), who do we think we are kidding?