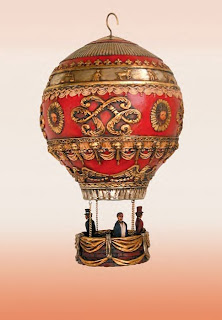 All this talk about toys with wings and people flying at incredible speed but where did it all start? With balloons in eighteenth century France.

Joseph was the one who realized that heat lifted objects though he thought it was because smoke contained a special gas, which he named Montgolfier gas. Incidentally, this is a much better use of smoke than lining your lungs with gunge and making eveybody else's life difficult because I got me rights, donni.

The balloon, which was used for a demonstration before Louis XVI and Marie Antoinette was made of taffeta with the collaboration of the wallpaper manufacturer Jean-Baptiste Reveillon. 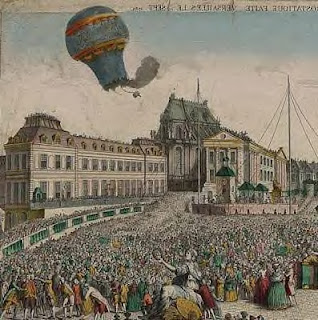 On September 19, 1783 the first flight with animals (it was decided to send animals before chancing humans, a sheep, a duck and a rooster, was demonstrated at Versailles before the King and Queen and sundry others.

The flight lasted approximately 8 minutes, covered 2 miles, and obtained an altitude of about 1500 feet. The flight would have been longer but the craft was unstable. It tipped wildly just after launch which allowed a considerable amount of hot air to spill from the mouth. The animals survived the trip unharmed.

On November 21 the first manned flight took place above Paris. The balloon with two passengers hovered for about 25 minutes and caused a sensation. The flight was much reproduced in illustrations.
Posted by Helen at 10:03