A window on the world 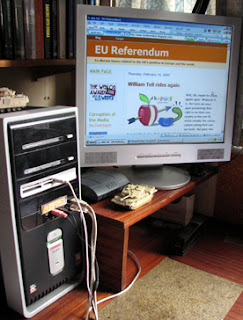 I was rather taken by the recent news that a Canada-set thriller won the lucrative Costa Book of the Year Award, despite being written by an agoraphobic British novelist who had never visited the country.

Stef Penney won the $49,000 prize for her first novel, "The Tenderness of Wolves" but, having developed agoraphobia after leaving university, could not travel to Canada to research the book. Instead, she studied maps and texts in the British Library, near her London home. Canadian readers were said to have been convinced that she must have had direct experience of the locale, so fresh and vivid was her writing.

This does not actually surprise me. Many journalists write their stories from the safety and comfort of their offices or hotel rooms, miles from the action, yet are able to describe things they have not personally seen. All too often we read of events in distant corners of Iraq and Afghanistan, the copy bearing the dateline Baghdad or Kabul, which has been edited by people in London or Washington, in their air-conditioned offices, thousands of miles away.

But, as Stef Penney demonstrates, distance is not necessarily a bar to accuracy, as an account can be reconstructed from the testimony of witnesses. Given a certain skill, a fair representation of events can be pulled together.

I had personal experience of that self-same thing some years ago, which made the front page of the local newspaper after I gave evidence to a coroner's inquiry on the cause of death of an unfortunate gentleman who had succumbed to food poisoning in a Midlands nursing home.

Contradicting the testimony of the local investigators, who had crawled all over the home, I had come to a different view, having pieced together events from reading the reports and carrying out telephone interviews of the "players", and especially the chef involved – getting him also to send a few items to the laboratory for testing. The newspaper complained that I had never visited the premises, and indeed I had not, but it was my testimony which prevailed, offering a coherent and plausible explanation for the outbreak which the men on the spot had not been able to provide.

In a way that should provide some small comfort for many blogger, sitting isolated in their garrets, miles away from the action, commenting on world affairs. Through the wonders of technology, we are able to use the miracle of the internet to garner information from the four corners of the world, and piece it together along with the best of them and provide a coherent and plausible explanation of (some) events.

However, while the computer provides a window on the world, the vision remains flawed. In some things, information is frustratingly limited, in others, it is heavily distorted and in yet others it is submerged in a welter of detail that makes analysis and comprehension difficult.

That is actually why we need journalists – good journalists – and why the MSM will never actually be replaced or even seriously challenged by bloggers, no matter what their pretensions might be. We need their skills to interpret for us and, more especially, we need the combined skills of the MSM teams to tell us what is important and what we should concentrate on.

The trigger for these reflections today, of all days – when there is an incredible amount to report and analyse, and the day-job is more than usually pressing – was this piece here, in the online version of the Wall Street Journal, which editorialises on the debate in congress on the Iraqi war. "Congress," it says, "has rarely been distinguished by its moral courage. But even grading on a curve, we can only describe this week's House debate on a vote of no-confidence in the mission in Iraq as one of the most shameful moments in the institution's history."

This, I thought, is incredibly important and, although I was very dimly aware of it, until now it had passed me by.

Similarly, late yesterday, I picked up this piece of news, reporting that the Taliban had taken control of their second Helmand district in less than two weeks. They had, according to district officials, captured the police chief of Washir district and 30 of his officers when they were out on patrol Sunday, 11 February. They then went to the district centre, where they took control, disarming the rest of the police," said the official.

The loss of Washir follows close on the collapse of Musa Qala, a district slightly to the south of Washir, and indicates that the Taliban might be consolidating its grip on the region.

Yet both issues are absent from the British media – these and many others. And while, in today's Telegraph, we appreciate reading the account of Col Jorge Mendonca's court martial verdict on the front page, I am not sure it warranted two further pages inside the book, and a leader.

It is this that worries me about the contemporary media, its inability to prioritise and thus its failure to bring us a more comprehensive view of what is happening in the world.

Unfortunately, we bloggers cannot do it. Too many are simply chasing the trivia or very narrow interests while, for the rest of us, we do not have the time. There must be an answer to this conundrum but, if there is, I – for one – have no idea what it is.