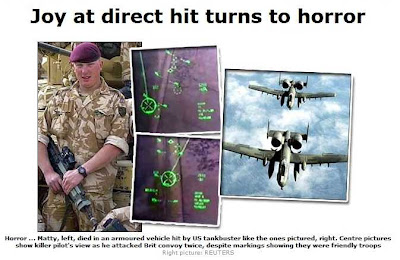 Whatever the underlying issues relating to the US "friendly fire" on British forces during the 2003 invasion of Iraq, the glee with which The Sun today published the A-10 cockpit video and transcript is evident.

It is a worrying demonstration of the nascent anti-Americanism in the British media, as is the highly tendentious article by Sun "defence editor" Tom Newton Dunn, purporting to offer an analysis of the video.

As is often the case, one of the commenters, noting that the pilots twice got confirmation from the forward air controllers that there were "no friendlies" in the area where the attack was made.

For once, shadow defence secretary Liam Fox, interviewed on BBC Radio 4's PM programme today, got it right. "It is easy for us to pontificate," he said (demonstrated more than adequately by The Times) "… there was confusing information on the ground and in the air … it wasn't as if there was an intent to harm British servicemen."

Listening to the radio exchanges between the pilots and their controllers, and watching the video, one can only conclude that this was one of those tragic mistakes that happen in war. In hindsight, it could have been prevented, but these things do happen.

But what is even more worrying is the evident strain of anti-Americanism within the British military that is brought to the fore by incidents such at these. At the time of the incident in April 2003, The Telegraph gave a platform to L/Cpl of Horse Steven Gerrard, the commander of one of the Scimitar vehicles attacked. He said, of the A-10 pilot who attacked the convoy: "He had absolutely no regard for human life. I believe he was a cowboy."

Speaking from his hospital bed on the Royal Fleet Auxiliary ship Argus in the Gulf, he had added: "There were four or five aircraft that I noticed and this one broke off and was on his own when he attacked us. He had just gone out on a jolly."

Then today, we get from Sky News Online the views of a friend of Lance Corporal of Horse Matty Hull, the soldier who was killed by the American pilot.

He told Sky News Online: "They murdered a very good friend of mine and should be made to pay a price." Identified only as Tom, he added: "I'm not surprised the Americans are trying to worm their way out of this… The US admit nothing because they live in their own world and don't care about anyone but themselves."

This, as we have pointed out recently (here and here) can so easily translate into an entirely unrealistic sense of superiority about our own forces, and an unhealthy refusal to accept that our allies have anything to teach us.

On a darker note, there is some speculation as to who precisely released the A-10 cockpit video to The Sun, with suggestions that the hand of the MoD is detectable.

That may or may not be a slur but, as the Coroner's inquest into the death of Lance Corporal of Horse Matty Hull descends into a lurid soap opera and the media move into the all too familiar feeding-frenzy mode, this has completely diverted attention of the earlier inquest into the deaths of Pte Phillip Hewett and his colleagues in a "Snatch" Land Rover.

Whether intentional or not, this is highly convenient for the MoD and the people who made the decision to palm our troops off with sub-standard equipment. The excessive interest in the A-10 tragedy, therefore, is simply another indictment of our fundamentally unserious media. But then, given the choice between soap opera with an anti-American tinge and some serious reporting, we can expect nothing more than the dross on offer.