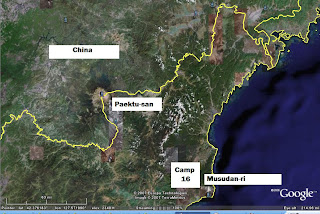 Why are we so obsessed with North Korea some of our readers must be asking. After all, it is not about to enter the European Union.

There are, of course those stories of the UN money being effectively handed over to Kim Jong-il and UN money is our tax money. Every penny that goes to North Korea is a penny more for one of the worst totalitarian tyrants in the modern world and I, for one, object to my money making his life easier.

Over and above that there is the question of freedom, which is indivisible. People in North Korea cannot do what we do, cannot speak their opinions, cannot blog, cannot read websites. They need our support even if they do not know we exist.

Therefore, it is of great interest to read on One Free Korea, courtesy of Gateway Pundit, the following story:

Sources residing in the district of Chongjin, North Hamkyung informed on the 1st and 5th “On December 20th, a mass group of 120 prisoners from the camp in Hwasung escaped and so the National Safety Agency and the People’s Protection Agency are in a state of emergency” and said “Lately, additional checkpoints have been established at various locations in North Hamkyung inspecting permits for both vehicle and personal travel.”

This is the first such story to come out of that hell-hole in twenty years.

The map above shows the position of Camp 16. It is a long way from China, it is a long way from anywhere. If these people managed to escape and stay escaped then, as One Free Korea says, they must have had help. Is there really an organized underground network in that country?
Posted by Helen at 15:04