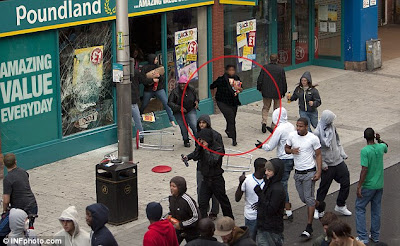 The Daily Fail is whingeing about the loathsome Cheri Blair allowing a cocaine smuggler to walk free from court. Sitting as a Crown court judge, she gave drug dealer Lee Williams a 12-month suspended sentence even though he had a kilogram of cocaine worth £145,600.

Three Appeal Court judges have now expressed astonishment at what was described as a "startling", "deficient" and "unduly lenient" sentence, and given the scrote three-and-a-half years. However, if that is regarded as an appropriate sentence, what of the Facebook duo, who got handed down four years apiece for "inciting" non-existent riots in their localities?

Contrast this with the recent news that only twenty percent of youths convicted of carrying a knife are given a prison sentences, the lowest proportion since 2008, despite Cameron's pledge to "get tough" on armed thugs. Most are given community punishments or cautions.

Then, as the backlog of last month's rioters and looters process through the courts, we get black girl and wannabe social worker, Natasha Reid, spared prison for nicking a television in a "moment of madness", yet a 17-year-old doctor's daughter – also a black girl – is jailed for eight months for helping herself to a bottle of Lucozade and some sweets from Poundland. She also helped herself to t-shirts and sunglasses from a nearby store as violence broke out in Peckham, south London.

So yes, in the heat of the riots, a lot of kids over-reacted. Which then left the adults with a situation which required mature, intelligent reflection, and some serious thinking about how best to handle the situation. But instead, the adults over-reacted as well, dispensing knee-jerk "justice". The street mob was replaced by the lynch mob, while the looters in suits carried on as before.

On the other hand, a drink-driver who left a young woman facing having her leg amputated has been spared a jail sentence by an Aberdeen sheriff. Suzanne James was more than three times the legal alcohol limit when her vehicle veered on to the wrong side of the road and smashed into Holly Sandison's car. The 52-year-old was told yesterday she "deserved" to go to prison for what she had done – but she walks free.

Here we go again, therefore, looking at yet another state function – but this one which, uniquely, only the state can do. And even the kindest, most gentle critics would have to admit that it is a shambles - a pathetic, dismal pretence of a system.

What credibility has the state got when, faced with this most fundamental and important of its tasks, it can't get this right? What a joke this crew is, a very, very bad joke. And we're supposed to take it seriously and give these clowns "respect"? This bunch of shambolic idiots expect the kids on the streets to take them seriously?

What right have this bunch of clowns got to tell us - tell anyone - what to do, when they can't even organise themselves to run a half-way credible justice system?