And now we pay 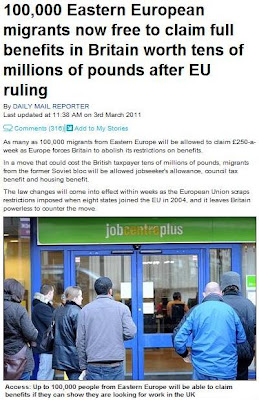 With the last major round of EU enlargement in 2004, one of the safeguards against being swamped with new migrants, who would then immediately sign on the dole and claim benefits, was transitional arrangements. We were forced to allow workers access, but could block entitlement to benefits unless or until they had worked continuously in this country for twelve months.

At the time, there was great controversy about this issue. As late as February 2004, the UK was only one the three EU countries which had not invoked these arrangements. But, under great pressure, Blair caved in, a move which then elicited a promise from the prime minister that: "No one will be able to come to the UK from anywhere in the enlarged European Union simply to claim benefits or housing".

What, of course, he did not stress is that which the EU commission site makes clear - the arrangements are time-limited. Coming into force on 1 May 2004, they expire after seven years and cannot be renewed. Thus, on 1 May this year, chickens come home to roost.

Says The Daily Mail, as many as 100,000 migrants from Eastern Europe will be allowed to claim £250-a-week as "Europe forces Britain to abolish its restrictions on benefits". That is not quite right, of course – the reality is that the restrictions lapse automatically. How entertaining it is that this happens on the Tory watch, with Euroslime Dave's ministers admitting that they are powerless to prevent it happening.

The Tories supported enthusiastically this round of enlargement, and now we see Damian Green, pensions and works minister, spinning furiously. He argues that there will not be a free-for-all. He is right, but only partially so. Yes, rules will still apply, but the point is that, under EU anti-discrimination law, we must apply the same rules equally to British nationals and EU immigrants.

This move, says The Mail, could cost the British taxpayer tens of millions of pounds, and there is no doubt it will. An unemployed Pole in his own country need only get on a cheap flight to London, find a doss house and register an address to pass the "habitual residence" test. Then all manner of benefits will flow his way. Any sensible Pole – and there are an awful lot of them – would be mad not to consider it.

Strangely, only last night I was writing that people have to get used to the idea that there is no natural limit to the amount of damage the EU can do. And here we have yet another example. My caution that we leave the EU, or it destroys us, was not hyperbole. The reality stares us in the face.

In the interim, one cannot fail to observe that there is no wonder we are cutting back the Armed Forces ... we will need the money to pay migrant benefits.