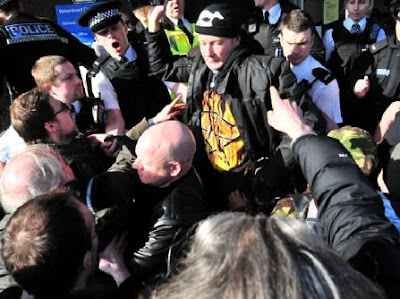 Roger Hayes took his campaign of lawful rebellion that little bit further yesterday, after he and his supporters arrested the judge who was set to hear his bankruptcy hearing, set up by the local authority after his refusal to pay Council Tax for the third year running.

In deliciously chaotic scenes (see link for short video), about six hundred supporters stormed Birkenhead County Court, briefly taking custody of Judge Michael Peake, before he was repossessed by Merseyside Police, who escorted him from the building.

The "arrest" took place after Hayes had asked the judge if he was serving under his oath of office. "I asked three times for him to confirm this and he refused," says Hayes, "so I civilly arrested the judge and I called upon some people in the court to assist me in this" – as one does.

Protestors from the public gallery then charged at Mr Peake to make a civil arrest chanting "arrest that judge". Police ended up having to scramble over court benches to control the near-riot and one protestor shouted "seal the court." Another sat in the judge’s chair at the head of the court and declared Hayes "released".

Deafening cheers and chants could be heard from the crowd outside and protestors used mobile phones to film arrests being made. Roads were blockaded and dozens of police officers deployed to keep order. A stand-off followed with several demonstrators staging a sit-down protest in front of police vehicles, refusing to let them pass.

Hayes is a former member of UKIP who stood for election in Wallasey in 1997, representing the Referendum Party against sitting Labour MP Angela Eagle. He polled 1,490 votes and finished fourth. As he emerged from the court surrounded by his supporters, Mr Hayes said: "The judges are breaking the law in their own courts."

The hearing had to be abandoned and will need to be re-arranged at a date to be fixed. Raymond Saintclair, who organised the Birkenhead protest, said: "Today was day-one. This is going to happen again and again and again. We have sent a message to this court as one nation and one voice until change comes."

Leaflets handed out by the crowd said: "We, the British People have a right to govern ourselves. That right has been subjugated as a consequence of acts of treason having been committed by the collective political establishment, aided and abetted by corrupt segments of the judiciary, the police, the Church and the civil service."

A statement from the police, in the leaden vocabulary of the breed, said: "Officers are committed to facilitating peaceful protests but will not tolerate criminal behaviour, disorder or anti-social behaviour during any demonstrations within Merseyside."

The response was slightly more colourful.