While Euroslime Dave equivocates about a no-fly zone for Libya, we get Stephen Glover in The Mail ask: "Has the democratic world ever been so weak and divided?"  Actually, the phrasing of the headline is wrong - much of the world Glover describes has long ceased to be democratic in any meaningful sense. And that may well be why it is so weak and divided ... it has lost its spiritual core, its will to live. Instead of leadership, we get David Cameron - and Barak Obama. 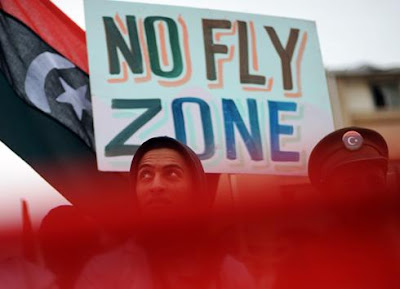 We're actually used to the idea of Catastrophic Clegg forgetting who is in charge, but when Euroslime Dave seems to have same problem, we see a systemic fault that no mere wake-up call is going to solve. It was suggested to me that perhaps Dave thinks he's still in opposition. But there is more to it that that. With the Libyan situation now going totally belly-up – and with little Willie Hague discovering that Gaddafi hasn't gone to Venezuela for his hols, after all – we now have Dave urging the UN on to "show some leadership".

This is the very antithesis of leadership. The idea of a man pretending to be a British prime minister, holding hands with France, asking a corrupt bunch of time-servers in New York to do something, the capability for which it does not have – and which we no longer have – is positively embarrassing. The person who should be showing some leadership is our Dave himself.

When you think about it though, in asking the UN Security Council to back a "no-fly zone", that is precisely what he is likely to get. Everybody will commit absolutely not to fly over Libya, leaving the field totally clear for Gaddafi to slaughter his rebellious subjects. 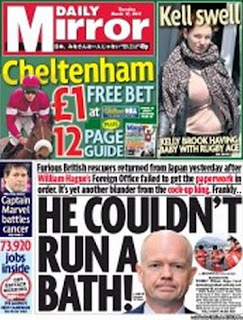 We never actually thought it would come to a point when you felt positively embarrassed to be British, but you have to give it to Dave and Willie ... they've managed to chalk up another first.

In days gone by, one might turn to the weightier newspapers to see what they had to say about the issue, but with The Times retreating behind a paywall, it has become irrelevant. Looking at The Daily Telegraph in the newsagent, and its banner headlines, it suddenly struck me what has happened to it - it has become the first and only tabloid broadsheet - a tableet? It too has written itself out of the script.

That leaves the Daily Mirror to make some appropriate comments about Willie, and The Daily Mail to offer some comment about changing defence priorities. "Only five months have passed since the Coalition’s hastily-drafted strategic defence review," it says. "Yet already the world on which its assumptions were based has changed in the most dramatic way".

The paper then calls for the defence review to be re-opened. But the writer should look at the piece written by Glover. The western world has lost its bottle ... the defence review was a symptom, and as long as we have effeminate babies like Cameron in change, we're going nowhere but down the drain.